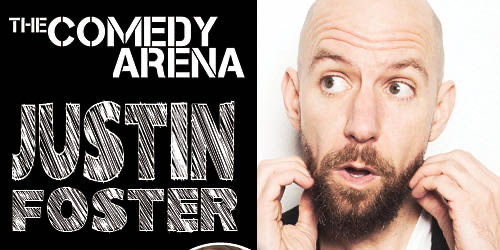 As Seen On:
The Joe Rogan ExperienceSIRIUS/XM​LAUGHS on FOX"Best of the Fest" at the Burbank Comedy Festival

Justin Foster is a native Texas comedian now living in Los Angeles. Justin quickly charms the audience with his weird, slightly off, yet likable personality that allows him to delve into personal stories of sobriety, his fear of flying, and drug dealer Dad. Strange, hilarious, and often unpredictable, Justin travels the country performing at theaters in Seattle, bar basements in North Dakota, and every place in between. Justin has been featured on the Joe Rogan Podcast, SIRIUS/XM, the Burbank Comedy Festival, the Cape Fear Comedy Festival in North Carolina, San Diego Comedy Festival, "Fresh Faces" at the Laugh Factory, and has been voted one of the Top Funniest Comics in Texas by the Improv multiple times. His debut comedy album, 'DANGERLESS', released worldwide 3/2/18 and debuted at Number one on iTunes.
“Justin has the audience eating out of the palm of his hand the entire show. Drawing material mostly from past and current life experiences, sobriety, dating, and his crazy family, Justin always makes the audience feel comfortable with his unique style of comedy.” -Sub.Urban Comedy

ENTERING & SEATING
The House typically opens 30 minutes before showtime. Seats are only guaranteed until showtime. Ticket price is more expensive at the door (if any remain).

All seating is based on size of party and when guests arrive at the show. We have cabaret style seating, so small tables with chairs around them. Most of our tables seat 4 people. If your group is smaller you may be sitting with another group, if it is larger you will have multiple tables next to each other. To ensure a whole table to your group, you need to buy 4 tickets.

ALL SALES ARE FINAL

No refunds or exchanges offered after the show. Please make sure you purchase tickets for the correct date and time. You may be able to have your tickets moved to a future event if you notify the box office 24 hours before the start of the show to which you have tickets.

There is a 2 Item (Food or Beverage) Minimum Per Person. This means each person must purchase 2 items off the menu. This can be an alcoholic, or non-alcoholic drink, or any of our food items. Once Seated; Food and Beverage service ends approx. 45 minutes into the show.