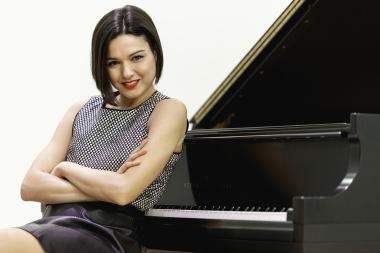 Prominent women, often highly accomplished performers and composers themselves, hosted the cultural and intellectual salons of the 18th century and contributed significantly to piano culture. Ms. Garcia Gil introduces Martines and Viardot, salonieres of Spanish origin, with their pianoforte works, and compares the sounds with a contemporary grand piano

Ms. Gil is a well-established fortepiano artist who has toured Europe, the US, and China playing concerts of Early Music, as well as solo and chamber works on modern piano. She is a regular at Royaumont and L'Abbaye aux Dames in France, the Netherlands Geelvinck Fortepiano Festival and the Bartolomeo Cristofori Academy and Bossi in Italy. She has won numerous prizes and competitions in Europe and was recently named an Early Music America Emerging Artist. She is currently teaching and completing her Doctorate at the University of North Carolina.