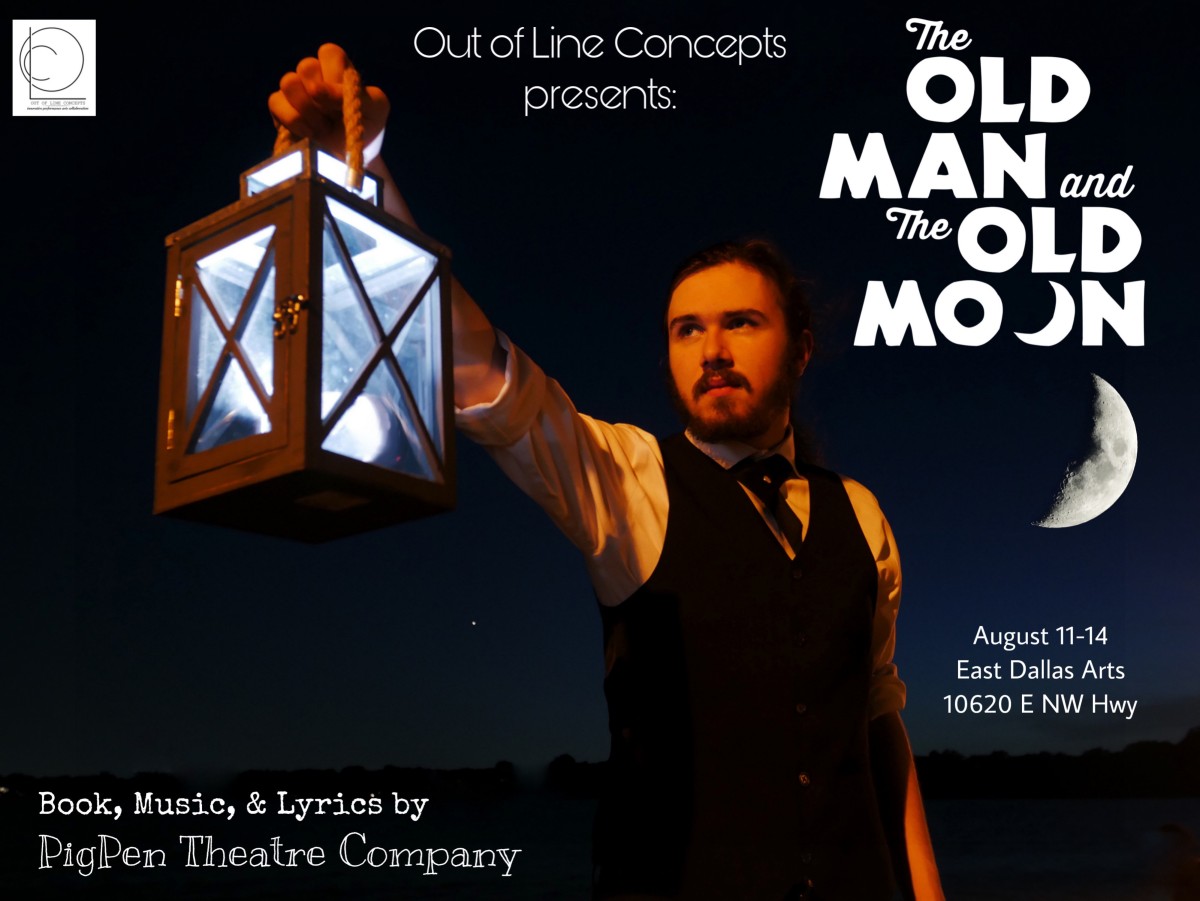 Partially narrated by the mysterious sailor and passionate storyteller, Matheson (Hayden Elliott), The Old Man (Adam Koch and Davis Chen) must refill the moon’s light as it slowly leaks out each night. When his wife (Arabella LaFond and Diana Wolfe) sets off on an unexpected journey, he abandons his duties and travels across land and sea in search of her.  He joins a haphazard crew of sailors who help him along the way.  The crew consists of Mabelu (Elora McLeod and Bee Falcone) a sailor with a good sense of humor and the best of intentions, Callahan (Ayden Lacey and Pyro Divoky) an ardent sailor who never loses a fight, Lewellyn (Tilda Grace) the youngest and somewhat naive spirited sailor, and Cookie (Phoenix Clasby) an unhinged cook who may or may not be afraid of fire.  Along his journey he is also helped by the witty and unconventional aeronautical engineers, Solomon (Audrey Webb) and Bartley (Romir Bose).

"I'm thrilled to present The Old Man and The Old Moon, Out of Line Concepts' third production at East Dallas Arts.  Out of Line Concepts focuses on developing characters and ideas in collaboration with the entire cast rather than the director dictating the entire show. I'm excited to work with such a talented cast and have The Old Man and The Old Moon also be guided by Hayden Elliott, a Booker T Washington student, accomplished actor and musician who will be lending his expertise in band and technical direction," said director Tilda McSpadden.

Director: Tilda McSpadden - An actor, dancer, and circus artist with stage and film experience, Tilda has 9 years of training in dance, circus arts, and musical theatre.
Band and technical direction: Hayden Elliott - A junior at Booker T. Washington HSPVA, Hayden has been performing in theater for 10+ years and has done sound design for multiple productions at Booker T. Washington and East Dallas Arts. He was also the technical director for Out of Line Concepts last production, Lord of the Flies, and was the sound designer as well as Lord Montague and Paris in OLC's debut production, Romeo + Juliet Shakespeare in Motion.

About Out of Line Concepts

Founded in 2021, Out of Line Concepts is owned and managed by 17 year-old Tilda Grace, a DFW professional actress represented by Linda McAlister Talent. OLC focuses on developing characters and ideas in collaboration with the entire cast rather than the director dictating the entire show. Mentored by Tom Parr, the artistic director of East Dallas Arts, the company presented their first main stage show, Romeo + Juliet Shakespeare in Motion in January 2021 at East Dallas Arts which was followed by Lord of The Flies in June 2022.

Founded in 2018, East Dallas Arts’ mission is to bring the community together by providing opportunities for everyone - young and old - to develop an appreciation for the arts through a variety of performance, education and arts experiences. East Dallas Arts opened their new performance space located at 10620 E Northwest Hwy in Dallas in February 2020. The space features a main theatre with a large studio rehearsal space and a small rehearsal room, lobby with soft seating area and can accommodate up to 150 people. Visit https://eastdallasarts.org for more information.