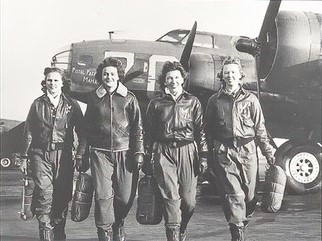 This exhibit honors the women who served our country during World War II, overseas and on the home front. While thousands of men were fighting for their country, the people back home were engaged in an extensive war effort of their own. We cannot forget the women who stepped up to meet the demands of the home front. Women were essential to the American War Effort. They worked in defense industries, joined the military, and completed countless other tasks to move the Allies closer to victory. In many cases, they made these contributions while meeting family obligations at home. This exhibit features the WASP’s, Rosie the Riveters, and famous aviatrix Jackie Cochran.

Funded by the FASH Foundation (original exhibit) and the Summerlee Foundation (printing of traveling exhibit) The exhibit is managed by the Texas Lakes Trail Region.