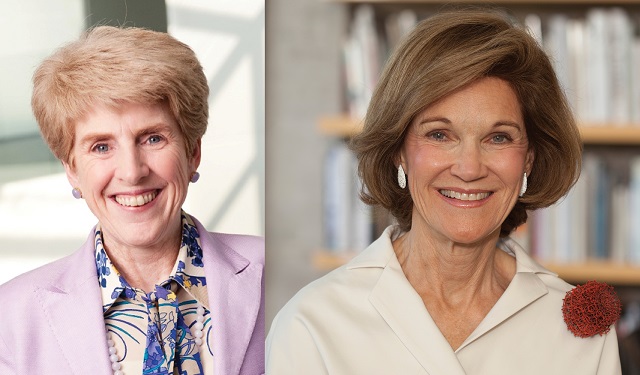 The Dallas Architecture Forum, a non-profit organization dedicated to providing public education about architecture, design, and the urban environment, continues its popular Panel Discussion Series on Wednesday, May 18th, 2022, at 6:30 pm.

Highly honored city leaders Lucy Billingsley and Deedie Rose will have a moderated conversation with Duncan Fulton on the topic “Medicis in Our Midst”. This Panel Discussion will be presented in the auditorium of Perkins&Will, 2218 Bryan Street, Dallas.

This event is FREE to the public – no reservations are required. Check-in and pre-Panel Reception will begin at 6:15 pm in the auditorium of Perkins&Will.

Every age has its Medicis - those who advance art and architecture in their cities in enduring ways. Two of Dallas' modern-day Medicis are Lucy Crow Billingsley and Deedie Potter Rose - visionary, enlightened civic and cultural leaders that have enriched our city in significant ways. Lucy and Deedie will discuss how and why they became interested in supporting the arts, culture and the built environment. They will also discuss current projects and causes on which they are focused. The Forum is honored to present them in a moderated conversation with Duncan Fulton in an evening not to be missed.

Duncan Fulton is Co-Founder, and the recently retired Chairman / CEO of GFF, the 2019 recipient of the TSA’s prestigious Architecture Firm Award. Duncan’s architectural work is diverse, with an emphasis on cultural and corporate projects. He has worked for many of Dallas’ most notable cultural institutions, including the Perot Museum of Nature and Science, the AT&T Performing Arts Center, the Dallas Arboretum, the Dallas Zoo, and the Dallas Theater Center. Duncan has written and lectured on a range of subjects including architectural design, planning policy, the Dallas Arts District, historic preservation, and sustainable design.

Lucy Billingsley has spent her career in real estate, developing and managing commercial developments. She and her husband Henry started Billingsley Company in 1978 to manage their growing real estate portfolio. The company specializes in developing office buildings, multi-family, retail and industrial properties, and master-planned communities, which include Cypress Waters, International Business Park, Austin Ranch, and the Arts Plaza campus in Dallas’ Arts District. Prior to Billingsley Company, Lucy was Chief Executive Officer of the Dallas Market Center and the Crow Design Centers in Dallas, Houston and Boston and Wyndham Jade Travel. Lucy has been inducted into the Texas Business Hall of Fame, the Junior Achievement of Dallas Business Hall of Fame, the NTCAR Hall of Fame, and she was awarded the 2013 H. Neil Mallon Award. Born and raised in Dallas, Lucy is a graduate of The University of Texas with a B.B.A. in finance. She lives in Dallas with Henry and has four children and eight grandchildren.

Deedie Rose is a founding board member and current chairperson of the board of the Trinity Park Conservancy. She is a current trustee and past chair and past president of the Dallas Museum of Art Board of Trustees and is a founding board member of the AT&T Performing Arts Center. Deedie has served as a member of the National Council of the National Endowment for the Arts and the board of the National Park Foundation. She is a past chair of the board of Public Radio International and serves on the boards of numerous other not-for-profit organizations, including Texas Christian University, the Dallas Theater Center, Hoblitzelle Foundation and Meadows Mental Health Policy Institute. Deedie has received the Anti-Defamation League Humanitarian Award, the TACA Neiman Marcus Silver Cup Award, given annually for distinguished service to the arts, and in 2013 received the Linz Award, given annually to an individual whose civic efforts created the greatest benefit to the city of Dallas.