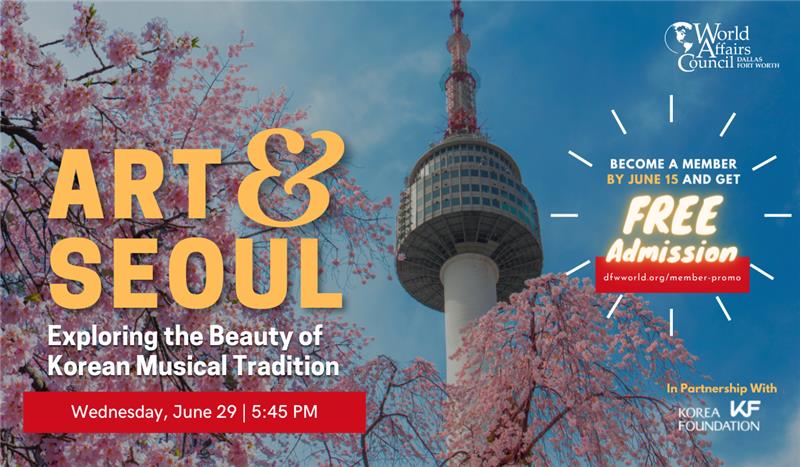 Art and Seoul: Exploring the Beauty of Korean Musical Tradition

Join the World Affairs Council, in partnership with the Korea Foundation, for a beautiful evening at the Dallas Arboretum celebrating Korean musical tradition. The night will feature a reception, live performance, and discussion on the legacy of Korean traditional music.

About Hilary Finchum-Sung
Hilary Finchum-Sung is a specialist in Korean music theory and performance practice and has been a member of the AAS for almost twenty years. Her academic training is in both ethnomusicology and East Asian Studies. Finchum-Sung has spent the past decade in the Republic of Korea, where she made history as the first and (to date) only non-Korean to have served as a faculty member in a department of Korean Music. She has published in academic journals such as Ethnomusicology, the world of music (new series), Seoul Journal of Korean Studies, and Acta Koreana.

As Associate Professor of Korean Music Theory and Ethnomusicology at Seoul National University’s College of Music, she has taught classes on Korean music and culture as well as music of the world and ethnomusicology. In addition to teaching and student advising, Finchum-Sung has served on many university and government committees, such as the SNU Diversity Committee and the Arts Council Korea, and as a board member of the Korean Ministry of Foreign Affairs. At SNU, she has held many administrative posts, including as the Chair of the Interdisciplinary Graduate Major in Music Education and the Associate Dean of Students and International Affairs at the College of Music. Fluent in Korean, she has also made musical fluency a priority in her ethnomusicological practice as a performer on the two-string fiddle, haegeum.