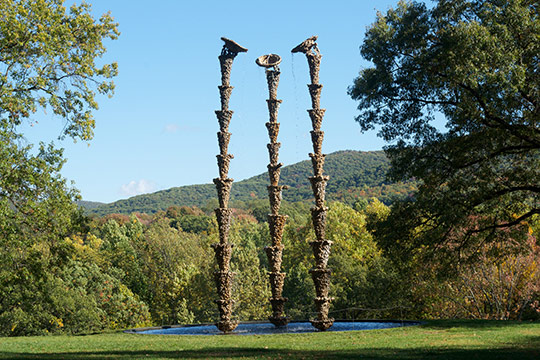 Throughout her five-decades-long career, Lynda Benglis has created sculptures in a wide range of materials that explore the physicality of form and its effects on the viewer. For her exhibition at the Nasher, Benglis highlights three bodies of work in media as diverse as traditional bronze and decorative glitter.

In the Garden, Benglis will make use of the water features by installing recently-created monumental fountains. Beginning in the 1960s with her poured latex paintings, for which the artist dripped and poured pigmented latex directly onto the floor, Benglis has been concerned with reconciling states of liquidity and solidity. By the early 1980s, with her first fountain developments, Benglis incorporated actual movement and flow into her work (as opposed to the static image or illusion of it). The added element of water over the surfaces of her sculptures further underscores the impression of gestural and spontaneous processes inherent in her latex and polyurethane pours of the 1960s and 1970s and gives the appearance of an object continually in formation and deformation.

Installed inside the Nasher, bronze enlargements of ceramic sculptures represent the importance of metal casting in Benglis’s practice—something she has engaged in since the early 1970s, while several works from her series of wall-based chicken wire, paper, and glitter sculptures demonstrate the artist’s commitment to surface ornamentation and engagement with issues of artistic taste and value. The exhibition's focus on new and recent work by the artist traces Benglis's long-abiding interests in gestural and organic forms and her use of casting as a means of extending the working process and producing identical works in multiple materials.