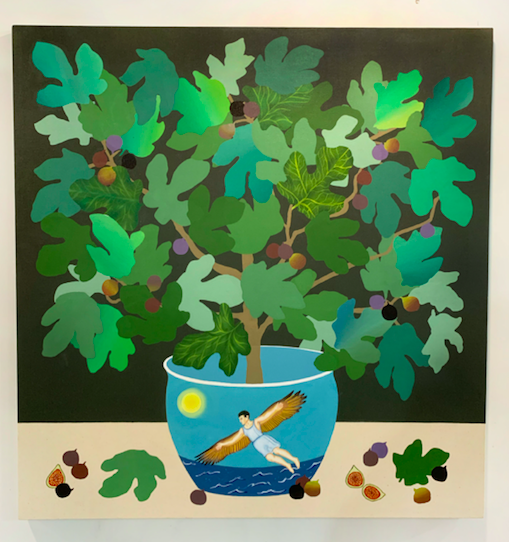 Here, the botanical subjects that have peppered D’Onofrio’s canvases in the past are arranged into representational depictions of flora seated in large porcelain pots. The artist’s investigations in the canon of Europe's illustration masters, such as Basilius Besler’s (1561–1629) botanical encyclopedia Florilegium and Giovanna Garzoni’s (1600–1670) work, have been reconsidered as new compositions which allude to the legacy of botanical illustration while remaining mindful that images become kitsch with age.

Formal considerations in the representation of plants is the most immediately recognizable element in D’Onofrio’s newest body of work, as it is the nature of depiction most endemic to the history of botanical illustration. The stem of a plant may be presented as separated from its root, so that both items can be shown in their differing characteristics. Flowers and fruit may be painted at a range of blossom and ripening. Leaves of a plant can appear full and lilting. Perspective and depth are impacted for the purpose of education; such is the nature of illustration.

These masters would have completed their illustrations as large research projects, sometimes commissioned by viceroys, scientists and wealthy courtesans. These images, requiring expertise and fiduciary investment, have been so stable that they have matriculated over the eons into the pedestrian realm of surface design, as D’Onofrio calls it. Printed upon textiles for clothing and tiling for interior design, their integrity is reduced to the level of kitsch by way of mass production. The same could be said for porcelain wares, like the ones that D’Onofrio’s plants sit in. One can imagine faded prints of Victorian-era botanical illustrations on the walls of a Dairy Queen in the southern United States, desperate for renovation. These images exude a kind of anachronism, repurposed for a display separated from their original milieu.

In D’Onofrio’s work, potted plants with ultra-flat leaves fill the canvas densely, their flowers painted in puzzlingly diverse styles. One may be pixelated, or outlined in a faux-neon glow to display how the nature of painting has evolved over the centuries. No matter the species of plant shown, their foliage encounters a vaguely square shape, constrained by the edges of the picture plane. In his solo exhibition, D’Onofrio has taken his verdant subjects and placed them in the historical application of botanical illustration. In doing so, he reminds us that the image of a plant has a long history of study, and later, infinite reproduction. Seeing these works, we have lemons, and are awaiting lemonade.

Stephen D’Onofrio  is a contemporary visual artist focused in painting. His work is characterized by an interest in the home decor market, the mass commodification of art, and the generic visual language that accompanies commercial design. He received his MFA from The School of The Art Institute of Chicago in 2016 and his work has been placed in numerous private nationwide and public collections such as Estee Lauder and Fidelity to name a few. D’Onofrio has lived and worked in Philadelphia since being awarded an artist residency in the city at Jasper Studios in 2017.