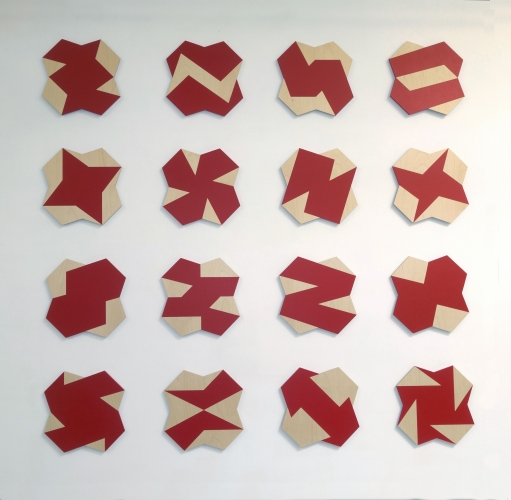 Barry Whistler Gallery is pleased to present SERIALITY + A Group Exhibition, including 18 artists.

Seriality + will be a continuation of its’ previous iteration. Several of the artist’s work from the previous installation will be included in this show and many others are added. The exhibition will again focus on works that offer a sense of repetition and progression. The successive and sequential pieces work to build anarrative.

Ed and Linda Blackburn’s collaborative work goes back several decades. Their work depicts country western singers originally conceived as baseball sized trading cards. We remember and hope to honor Linda Blackburn’s memory and legacy to the Dallas/Fort Worth art world after her passing at the beginning of this year.

Three large canvases by Michael Miller will be included in the show. His recognizably bold and bright patterns with text are emphasized in these pieces.

Steve Dennie, Jay Shinn, and Tom Orr will be featuring works from their studiovdated 2019, 2016, and 2015 respectively. These artists’ slightlyv earlier works reflect an approach in their practice of serial imagery. Lawrence Lee discusses his narrative that unfolds in his 60” square drawing, “In the story there is a mountain island in the middle of the ocean where a certain bird lives. Once every 700 years, the bird begins to sing and the song can be heard all over the world. Warriors from all corners of the world can hear the singing and the bravest among them respond. The first seven warriors to reach the top and pluck one of the bird’s tail feathers become immortal warriors/protectors of the world. The drawing depicts these brave heroes as they first behold the isle on the
horizon.”

Marfa based artist, Leslie Wilkes, will have a grouping of her gouaches from 2020.

The earliest piece featured in the show will be Sam Gummelt’s work titled, DoubleWhite. The piece was made in 1972 and makes use of the herringbone pattern that he adopted at that time. Allison V. Smith continues her ongoing investigation of West Texas landscape and identity. The three photographs featured in Seriality + were taken in Farwell, Texas in early December 2021. New York artist Mark Williams explains his choice of material, “During the pandemic, groceries and household needs are delivered in cardboard boxes. Normally, I paint on stretched canvas or wood panels. That changed in April 2020. I began to paint on cardboard cut from the delivery boxes. The cardboard is readily available and offers a more relaxed open way of working.”

Liz Trosper and Lorraine Tady as described by Eric Shaw continue to “…integrate digital means while exhibiting a primary interest in the interaction of shape, color, and line. Through their techniques are varied, each embraces abstraction as a signature mode and exults in the gregarious use of hue.”