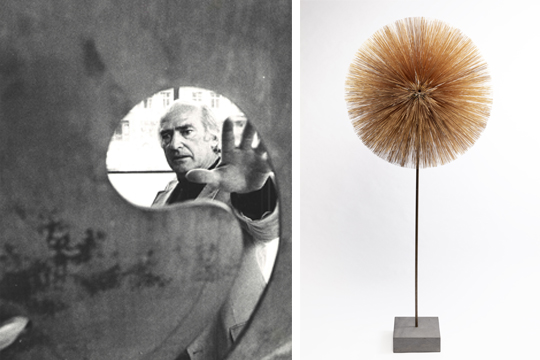 An in-depth discussion of the work and impact of American artist Harry Bertoia (1915–1978), who was one of the most prolific, innovative artists of the postwar period. Bertoia’s legacy includes designs for one-of-a kind jewelry and iconic chairs, thousands of unique sculptures including large-scale commissions for significant buildings, and advancing the use of sound as sculptural material. Harry Bertoia: Sculpting Mid-Century Modern Life questions how and why we distinguish between a chair, a necklace, a screen, and a freestanding sculpture—and what Bertoia’s sculptural things, when seen together, say about the fluidity of visual language across culture, both at mid-century and now.

Dr. Sydney Skelton Simon
Between Medium and Technology: Bertoia’s Monotypes and the Synthesis of Art and Design

Celia Bertoia is Director and Founder of the Harry Bertoia Foundation and the youngest daughter of Harry Bertoia. She has a background in real estate and fundraising, and created the foundation in 2013. Her biographical book, The Life and Work of Harry Bertoia, came out in 2015. She lectures internationally on her father, and interviews extensively. She is a fine arts appraiser through the American Society of Appraisers (ASA) who is qualified to issue certificates of authenticity, and to appraise Bertoias.

Olivia Block has forged an influential career in experimental music and sound installation over the past thirty years. In addition to a discography of over twenty solo and collaborative recordings, Block has performed and exhibited around the world including installations and premieres in Europe, North America, and Asia at venues such as the Institute of Contemporary Art, London, Museum of Contemporary Art, Chicago, the Museo Nacional Centro de Arte Reina Sofia, Madrid, and La Biennale di Venezia 52nd International Festival of Contemporary Music. She has worked directly with Bertoia’s sounding sculptures on two occasions, for the work Sonambient Pavilion, which was performed at Chicago’s Pritzker Pavilion in 2015, and for her Sightings installation at the Nasher, The Speed of Sound in Infinite Copper, which coincides with the Bertoia retrospective.

Dr. Sydney Skelton Simon is an art historian and curator who specializes in post-World War II American art and design. She is currently the Bradley Assistant Curator of Academic Affairs at the Yale University Art Gallery in New Haven.  Simon’s essay details Bertoia’s lifelong work in monotypes and their relation to his broader practice.

Dr. Marin R. Sullivan is an independent curator and art historian based in Chicago. She is the Director of the Harry Bertoia Catalogue Raisonné.  She is co-curator of the exhibition and contributed an essay on Bertoia’s large-scale, corporate, and architectural commissions, as well as an appendix cataloguing all of these projects.