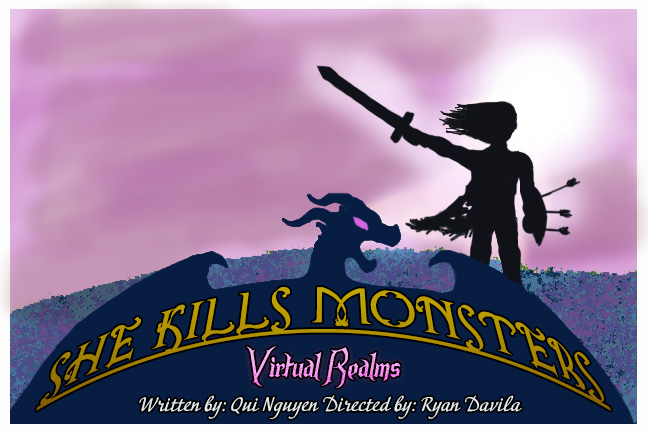 With the uncertainty brought on by the global pandemic, theatre as we knew it changed, leaving many without opportunities to work and attend local productions. To combat this, playwright Qui Nguyen took one his most popular shows, She Kills Monsters, and adapted it for a Zoom format.

After the sudden and tragic death of her younger sister, Agnes finds Tilly’s notebook that contains a Dungeons and Dragons campaign. Regretting that she never took the time to get to know her sister, Agnes decides to try playing the campaign written by her sister, hoping it will help her come to terms with Tilly's death. On this journey, Agnes will learn about the world her sister took solace in as well as some heartbreaking struggles Tilly faced in the real world.

She Kills Monsters: Virtual Realms combines geek culture, fun fantasy characters, humor, tragedy, loss, and the love and acceptance of true friendship. The digital format caters well to elements that could not typically be performed on stage, and features an all original score from Matthew McNabb as well as original graphics by Joshua Dobelbower. Dive in and immerse yourself in the world of She Kills Monsters, directed by Ryan Davila, running October 22nd-24th.

Ryan Davila served as Technical Director for Sundown Collaborative Theatre from 2017 to 2020. He is now happy to step into the role as an Artistic Associate. Ryan was first introduced to Sundown Collaborative Theatre when he played Big Stone in Eurydice by Sarah Ruhl. Since joining Ryan has performed in Sundown’s Short Works Festival and has designed lights for BUG, Pillowman, and Lemons Lemons Lemons Lemons Lemons. He also worked on the lights and special effects for The Woman in Black. Outside of Sundown, Ryan has taught improv and stage combat for Theatre Denton’s youth education program. Ryan is hoping to be a theatre teacher someday.

“This show challenged us both as technicians and performers to create a full-blown production behind the safety of our computer screens. Through hard work and constant communication and collaboration, Sundown was able to gather a talented group of artists to bring the magnificent geekery of this show to life.” -Kelsey Smith, Stage Manager

“As someone who’s loved theater and Dungeons & Dragons for years, I think She Kills Monsters is a wonderful gateway from one to the other and back. It has the full-fledged fantasy and found family of D&D, the visual spectacle and poignant reality checks of theater, and the sheer heart and spirit of self-reflection the two share. These two forms of storytelling are so much more similar and well-suited to each other than we often realize, and they come together beautifully in this play to show what D&D—and, quite frankly, life—can be: an ongoing journey of discovery, learning, magic, and love.” -Calista Hoyer, Tilly

Tickets are $20 for the general public, $15 for Patreon supporters.