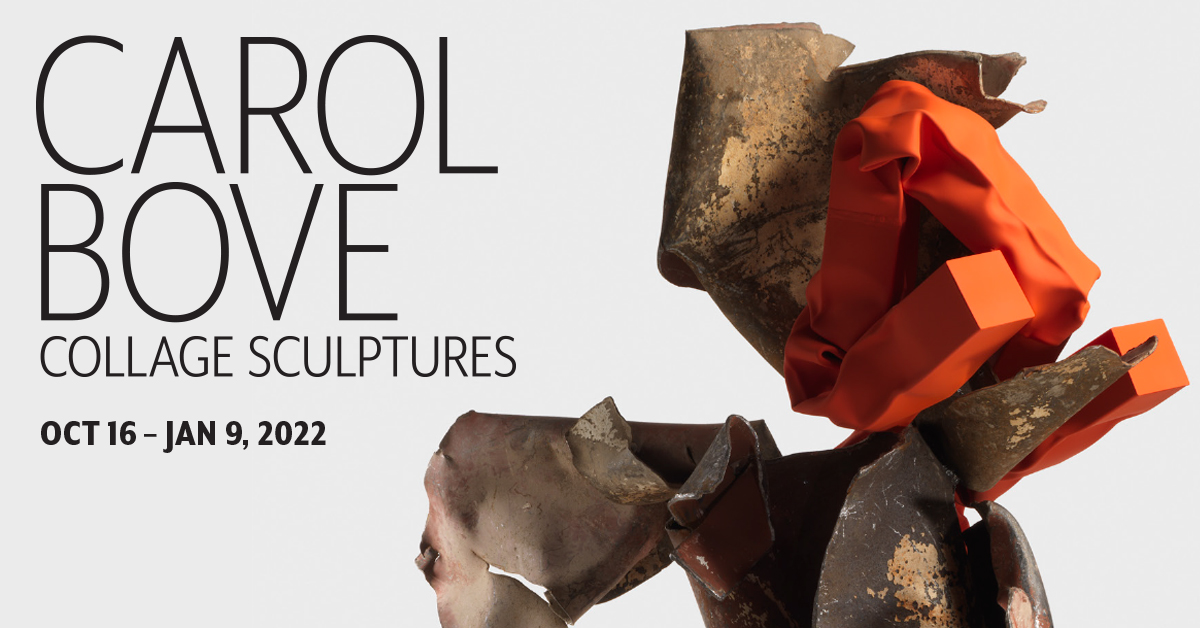 In the first major museum presentation focused solely on Bove's formidable steel sculptures, Carol Bove: Collage Sculptures will bring together nine sculptures from the last five years, two of which have been made especially for the Nasher’s exhibition. Organized by Nasher Curator Dr. Catherine Craft, Carol Bove: Collage Sculptures will provide an in-depth consideration of one of the most consequential artists working today.

“Carol Bove is an artist of tremendous range and subtlety, and we are greatly looking forward to her Nasher presentation,” says Director Jeremy Strick. “Her work deftly expands traditional sculptural precedents into physically and conceptually fresh, revelatory new forms that confound and delight.”

Bove’s recent works take as their point of departure the means, materials, and visual language of a certain mode of midcentury sculpture often found in plazas and other public spaces and represented by such artists as Mark di Suvero, Richard Serra, and John Chamberlain. By welding and bolting together different forms of steel, from found scrap metal to tubes coated in rich, matte layers of color, Bove creates new possibilities for traditions previously considered to be exhausted.

Upon first seeing Bove’s early iterations of this new work, Curator Catherine Craft has remarked: “The materials, processes, and syntax of Bove’s nascent sculptures seemed profoundly familiar to me, but there were, thrillingly, elements of the unknown, as if this long-familiar approach to sculpture could lead into places not yet imagined.”

The sculptures also highlight Bove’s investigations of spontaneity and discontinuity in relation to her materials and the ways these sculptures present, in her words, “a story of movement and pressure, force and softness.” To make such works—which range from monumental outdoor sculptures to small tabletop compositions— Bove and her studio team work intuitively, shaping the steel with an array of tools—many custom-made for this very purpose—that dent, crease, buckle, and crush her materials into such malleability that the results can resemble billowing folds of drapery. Once prepared, components are brought together using winches, gantries, and cranes, and they may be punctuated with thick, glossy discs Bove calls “polka dots.”

Bove’s collage sculptures are distinctive for their subversive use of color, which often draws upon outdated print technologies, digital distortions, and the palettes of other artists. Yellow, a prevalent hue in the collage sculptures, seems to trace back to Bove’s encounter with a Willem de Kooning painting. Likewise, her reds recall the cadmium red light favored by Donald Judd, who considered it the best color to define a three-dimensional object. Recently, Bove has made sculptures from unpainted, stainless steel, the newest example of which will make its debut in the Nasher’s garden.

Carol Bove: Collage Sculptures also explores Bove’s work in relation to traditions of twentieth-century sculpture, using the context of the Nasher’s permanent collection to consider the ways that changing contexts can shift our understandings of individual artworks or constellations of objects. Working with Dr. Craft, Bove has selected a group of small works—miniatures, maquettes, models, and experiments—by artists ranging from Alberto Giacometti and Pablo Picasso to Henry Moore and Tony Smith, that will delve into the mystery of scale: how large, or small, an object feels, relative to its actual size.

Carol Bove: Collage Sculptures will be accompanied by a richly illustrated, scholarly catalogue to be published in December 2021. In addition to documenting the exhibition, the book will include a broader consideration of Bove’s collage sculptures, with essays by Dr. Craft and curator and writer Lisa Le Feuvre, the Executive Director of the Holt/Smithson Foundation and former Head of Sculpture Studies at the Henry Moore Institute.