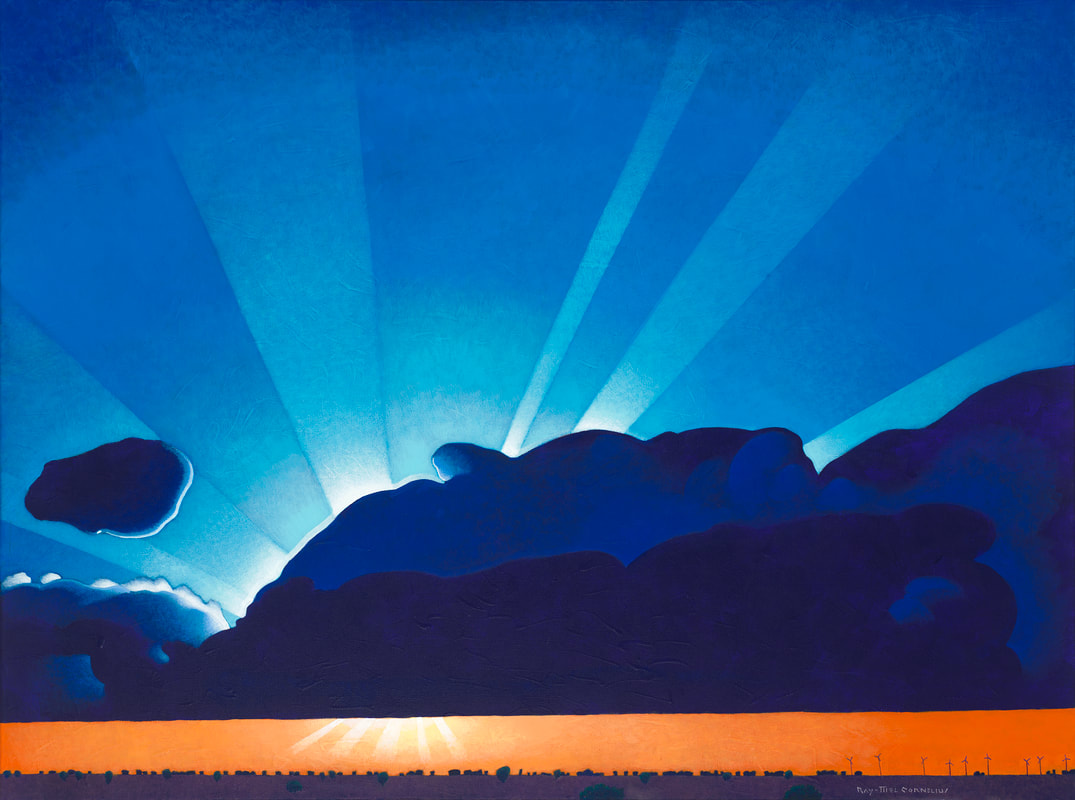 This body of work is influenced by the artist’s memories of growing up in rural Texas, as well as Precisionism, Symbolism, Surrealism and Pop Art movements. The color palette is one of optimism. Cornelius begins with a field of purple with each work, and then brings light to build up the visual elements in his compositions. This creates a vibrating effect when paired against reds and oranges, and a deep richness to cool hues.

In these works, the majority of the canvas is dedicated to sky views, where clouds, comets, fireflies, and the moon rule the domain. They are grounded by the tops of trees, roofs, or slender landscapes existing at the very extreme bottom edge of the compositions. Figures and buildings are dwarfed by the atmospheric expanses.

About the Artist
Ray-Mel Cornelius was raised on a farm outside a small town in Northeast Texas, where he found the inspiration of wide-open spaces and its inhabitants to be the catalyst for his work. Reflecting his interest in landscapes and the mythologies accompanying them, he begins with a dark underpainting then applies layers of tonal values, allowing him to explore representation and abstraction while defining form. His works are best described as interpretations of folklore and Americana.

He has been recognized in forums such as AcrylicWorks: The Best in Acrylic Painting, The Artists Magazine, Drawing Inspiration: Visual Artists at Work, Fantasy Art Magazine (China), Incite 2: Color Passions, Strokes of Genius 4: Exploring Line and Strokes of Genius 5: Design and Composition. The May 2015 issue of Southwest Art Magazine profiled my work in its Artists of Note feature.

His work has been included in exhibitions hosted by the Bath House Cultural Center, Centraltrak, The Turner House, Mountain View College, The Womens Museum, all in Dallas, Texas, J.M. Moudy Art Gallery, TCU, Fort Worth, Texas, Freestone County Historical Museum, Fairfield, Texas, Clermont College Art Gallery in Cincinnati, Ohio, The Gallery at the National Western Club in Denver, Colorado, The Showroom Gallery and The Museum of American Illustration, both in New York City. Since 2001 He has exhibited in eight solo shows in five venues.