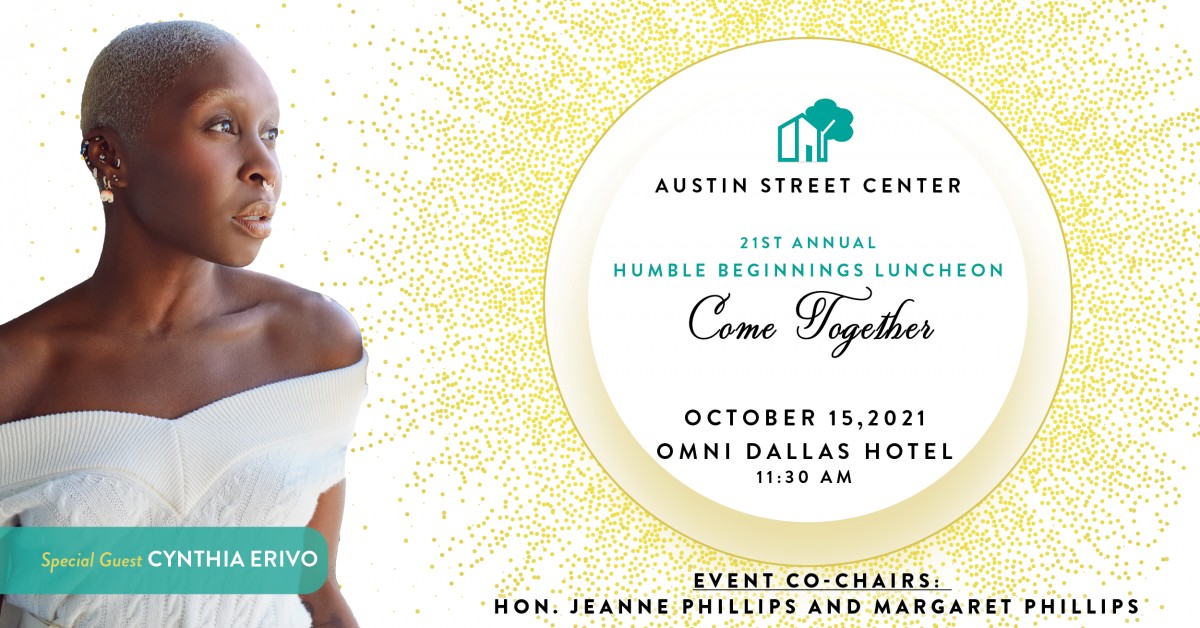 The Humble Beginnings Luncheon, now in its 21st year, is an upbeat and elegant mid-day luncheon affair drawing social, civic and business leaders from across the Dallas/Fort Worth Metroplex. Proceeds benefit to Austin Street Center, whose distinct mission is to provide safe shelter and meet the basic needs of the most vulnerable homeless.

Cynthia Erivo will join this 21st Annual Humble Beginnings Luncheon themed “Come Together,” as the featured guest in a mix of conversation and performance. The Emmy, Grammy and Tony-Award Winning Actress and Singer-Songwriter can currently be seen as ‘Holly Gibney’ in the HBO miniseries adaptation of Stephen King’s, “The Outsider.” Most recently, she portrayed Aretha Franklin in National Geographic’s Emmy Award-winning global anthology series, Genius, with her episode titled “Genius: Aretha.”  In 2019, Erivo received two Oscar nominations – one for her role as Harriet Tubman in the Focus Features biopic Harriet, and the other for the film’s title track “Stand Up,” which she co-wrote.

The 2021 Co-Chairs are Jeanne Phillips and Margaret Phillips. Austin Street will present the Norm Hitzges Distinguished Service Award to Frank Mihalopoulos and the late Maryann Mihalopoulos for their lifelong example of service above self, not only to Austin Street – but to the many other organizations they have championed. Additionally, the Dallas Mavericks organization will receive the first-ever Austin Street Center Corporate Service Award in recognition of their steadfast support of the wider Dallas community, and in particular, their servant leadership during the coronavirus pandemic and Winter Storm Uri this past February.

For More Than 30 Years, VideoFest Evolved With The Times

The next Frame of Mind episode is surreal, yet you’ll relate to its pandemic themes.