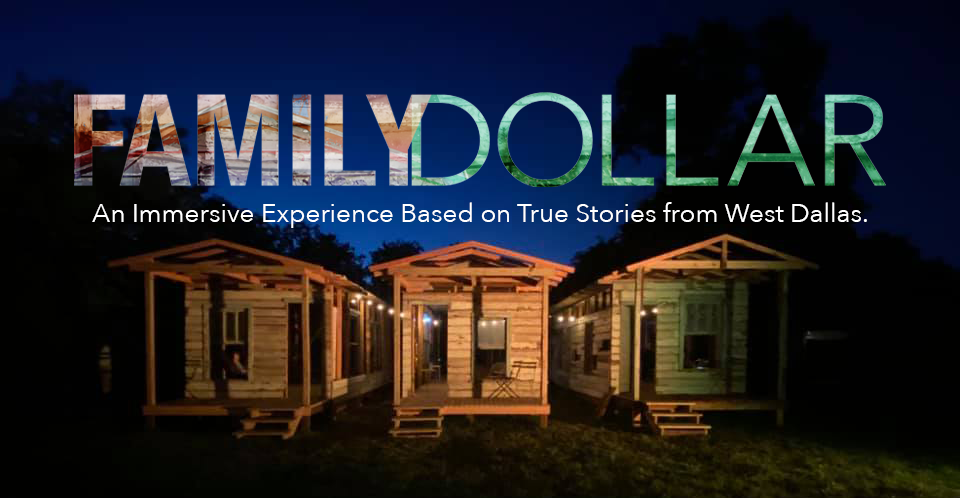 Artstillery, an experimental performance group based in the Dallas neighborhood of Oak Cliff, has been working for five years with the residents of West Main Street, a tiny neighborhood with a long history in West Dallas, documenting their stories and working to save important structures that are quickly disappearing due to rapid gentrification in the area.

The project, called Family Dollar (2016–2021), is an extensive archiving effort that includes documentary film, architectural preservation, and live, immersive, though socially-distanced performances that are also recorded for on-demand digital and VR experiences.  As part of Nasher Public, the Nasher Sculpture Center is partnering with Artstillery to support and amplify each layer of Family Dollar, helping bring awareness to the group’s important work and to the stories of the West Dallas community.

Artstillery has interviewed more than 25 current and former residents of the West Main Street neighborhood, preserving their histories, and using them as the basis for performances to take place in two of the last original shotgun houses in the neighborhood.  Rather than allowing the houses to be torn down by developers, Artstillery responded to residents’ desires to see them preserved. With the advice and efforts of volunteers from the engineering and architectural firm, Mead & Hunt, Artstillery moved and reconstructed them on the property of the neighborhood church, Lone Star Missionary Baptist, long a cornerstone of the community, preserving the structures as sculptures. They stand as memorials to the history of the neighborhood, and sites for performances that bring the stories of the neighborhood to life.

During and after the run of performances, visitors will be able to visit the shotgun houses, read labels detailing the stories of neighborhood residents, and access videos of the residents and, eventually, VR recordings of the Artstillery performances on their smart phones via the Nasher and Artstillery websites and the Nasher app.  Performances of Family Dollar begin June 18 and run through July 31, 2021. The reconstructed shotgun houses are open to visitors Thursday – Sunday from 11am – 5pm, June 24 – August 8, 2021. Tickets to performances are available through the Artstillery website, as is more information about the history of Family Dollar, including video documentation of the residents’ stories.

Family Dollar represents an innovative form of performance art that starts with community engagement to bring untold oral histories to light.  Artstillery’s project is a form of social sculpture, an artistic practice conceived by German artist Joseph Beuys in the 1970s that proposed that every aspect of life could be approached as art, and thus everyone could be an artist.  Beuys extended this idea to political and social engagement and inspired generations of socially-motivated and active artists including Rick Lowe, who initiated a work of social sculpture in the Vickery Meadow neighborhood in Dallas for the Nasher Xchange exhibition in 2013 and whose Project Row Houses (1993–) has restored several blocks of shotgun houses and transformed part of the Third Ward, one of the oldest African-American neighborhoods in Houston.

Along with the larger neighborhood to the west, known as Muncie, or “the neighborhood,” West Main Street, known to residents as “the street,” formed part of a largely African-American enclave just across the Trinity River from Downtown Dallas.  One of the only parts of town where Black residents were allowed to buy land and build houses due to racist redlining practices, West Main Street grew up along two physical barriers: the levee holding back the Trinity River and the train line that still separates it from the Tin District and Trinity Groves.  Many of its initial residents worked for the train companies and the nearby industrial businesses.  Only three blocks long, the residents of West Main Street formed a tightly knit community where neighbors knew and helped one another.  The fabric of the neighborhood grew organically, but centered around the church, which started in the home of Mrs. Bertha Anthony in early 1939, and Frederic Douglass Elementary School, across Sylvan Avenue in Muncie.  West Main Street thrived after World War II but was only officially annexed as part of Dallas in 1952, which brought more widespread basic municipal services, like electricity and water, to residents, who nonetheless had to fight the city to supply them.  The fortunes of the neighborhood declined in the last decades of the 20th century, as longtime residents passed on or moved away.  Recently, in anticipation of the long-awaited development of the Trinity River, real estate developers have been buying up lots in the neighborhood and combining them to replace single-family homes with new, high-end apartments.  A few original residents still remain, as does Lone Star Baptist Church, which hosts Family Dollar and the reconstructed shotgun houses, and welcomes all to worship with them.

Artstillery is an experimental performance nonprofit that empowers marginalized communities.  Their approach is a process of research by gathering stories though community engagement, interviewing, and documenting experiences.  Artstillery combines those stories with mixed media, performance, sound design, video, and art installation for a completely immersive performance.  They believe audiences should be more than just spectators and have traded the fourth wall for an experiential performance style that creates immersive theater.  Artstillery activates artist ecosystems and spaces through empowering community.  “We are an organization that adapts to help bring to light the stories that go unheard, that are threatened to be lost, or that need a platform,” says Ilkur Ozgur, Artstillery’s founder, on behalf of her whole team.  “When art starts with the truth of experience, we believe it can heal and elevate.”