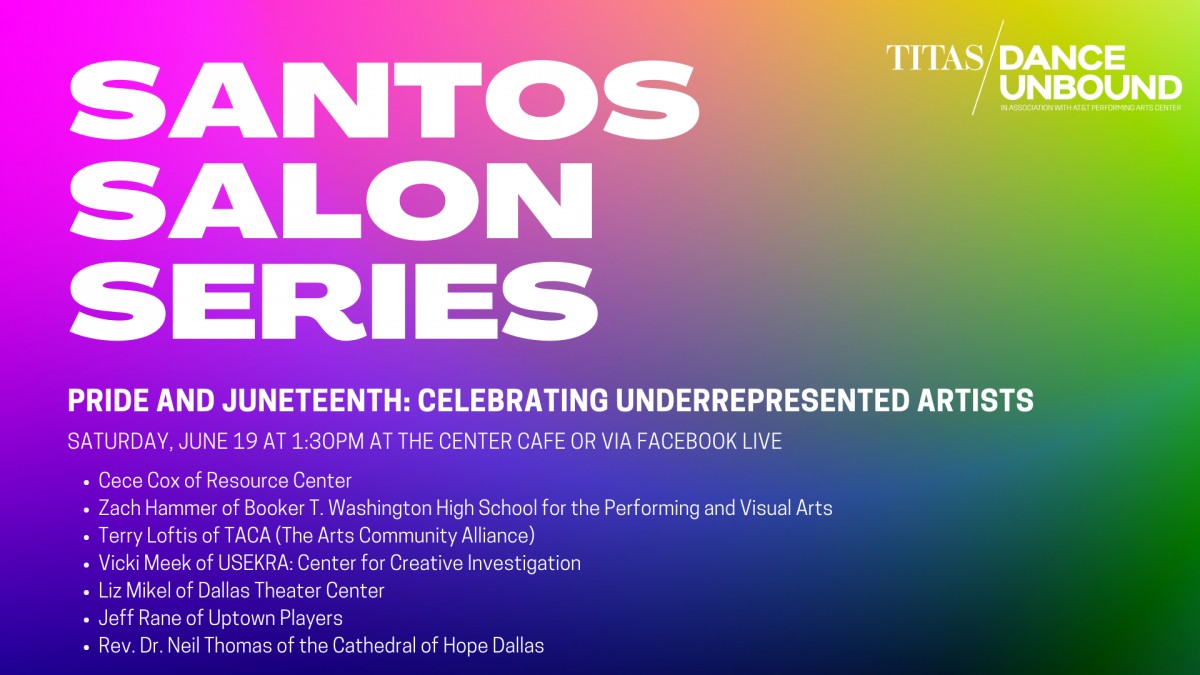 Join TITAS/DANCE UNBOUND’s Executive Director, Charles Santos, on Saturday, June 19 at 1:30pm for an in person and live streamed discussion with a panel of arts community leaders and performers on the impact the LGBTQ+ and Black community has made on arts and culture.

This conversation, held on Juneteenth, will celebrate the contributions of LGBTQ+ and Black artists, and discuss how the arts community can better support these groups through movements such as the Black Lives Matter movement. Panelists will include:

Rev. Dr. Neil Thomas of the Cathedral of Hope Dallas

Join us on Saturday, June 19th at  1:30pm CT at the Center Café, in front of the Winspear Opera House,  during the Dallas Arts District Pride Celebration or online via Facebook Live for this conversation. COVID-19 precautions will be taken for the in person conversation and masks are required. The Center Café is located at 2353 Flora St Unit 2413, Dallas, TX 75201. People are welcome to watch and listen live outside the cafe.

TITAS/DANCE UNBOUND is a dance only presenter and a catalyst for cultural collaborations. Our Santos Salon series is designed to bring our arts community together and create meaningful conversations during this difficult time. Artists need to come together, support each other, and have these conversations so we can ensure that all voices are heard, now and in the future.

Cece Cox, is recognized for her longtime effective leadership and advocacy in the lesbian, gay, bisexual, transgender and queer/questioning (LGBTQ) civil rights movement. Since 2010, she has served as CEO of Resource Center, which operates one of the largest LGBTQ community centers in the United States, and provides health services and programs to individuals affected by HIV/AIDS. The Center serves more than 60,000 people annually with a staff of over 70 employees and 1,100 volunteers. Participation in the Center’s programs for youth, seniors and transgender individuals have doubled under Cox’s tenure. Cox has advocated on behalf of the LGBTQ and HIV communities for over 30 years. She was instrumental in the passage of the City of Dallas’ sexual orientation nondiscrimination policy, the Dallas Independent School District’s first anti-harassment policy and its subsequent anti-bullying policy. Since June 2010, over 50,000 public sector employees and a quarter-million students in the Dallas area have new or expanded LGBTQ nondiscrimination protections thanks to the Center’s advocacy. Cox is a board member and former co-chair of the national organization, CenterLink; a member of Dallas Mavericks Advisory Council; a member of SMU's Tate Board of Directors and a board alumna of Texas Women’s Foundation. She has served on the executive committee for SMU’s Simmons School of Education and Human Development and is a member of Dallas Assembly and Dallas Summit. She has served as president of the Dallas Gay and Lesbian Alliance (DGLA), co-chair of the Gay and Lesbian Alliance Against Defamation/Dallas and as an officer of the LGBT Section of the State Bar of Texas. Additionally, Cox was recognized with the Kuchling Humanitarian Award from Black Tie Dinner in 1999 and was selected by D CEO Magazine as one of the top 500 CEOs in Dallas in 2016. In 2020, Cece received the Jubilee History Maker Award from Dallas Historical Society. Cox earned a bachelor’s degree from Northwestern University and a law degree from SMU. She lives in Dallas with her partner and son.

Zach Hammer, has danced, taught, and choreographed professionally for over 20 years. As a New York-based dancer, he toured both abroad and domestically with Parsons Dance, Nicholas Andre Dance Company, Amy Marshall Dance Company, dre.dance, and Alison Chase Performance. From 2010 to 2014, he was a dancer in the New York City cast of the Radio City Christmas Spectacular. He has worked for the Mary Kay Industrial, Sally Beauty Supply, Veuve Clicquot, and the Miss Texas and Miss Florida Pageants. His choreographic works include the DIFFA Fashion Show, The Miss Texas Pageant, the Mary Kay Industrial and numerous modern, ballet, and jazz pieces for soloists and dance companies across the country. He has served as an adjunct professor of jazz dance at Southern Methodist University, managed and taught all styles of dance at Preston Center Dance, and was on the musical theatre faculty at the KD Conservatory. In 2016, he joined the dance faculty of Booker T. Washington High School for the Performing and Visual Arts, where he is now in his fifth year.

Vicki Meek, born and raised in Philadelphia, Pennsylvania, is a nationally recognized artist who has exhibited widely. Meek is in the permanent collections of the African American Museum in Dallas, The Museum of Fine Arts in Houston, Fort Wayne Museum of Art in Indiana, Paul Quinn College in Dallas, Serie Art Project in Austin and Norwalk Community College in Norwalk, Connecticut. She was awarded three public arts commissions with the Dallas Area Rapid Transit Art Program and was co-artist on the largest public art project in Dallas, the Dallas Convention Center Public Art Project.  Meek was selected as one of ten national artists to celebrate the 10th Anniversary of the Nasher Sculpture Center with the commissioning of a site-specific installation. Meek’s retrospective “Vicki Meek: 3 Decades of Social Commentary” opened in November 2019 at Houston Museum of African American Culture and marked the end of her concentrating solely on her installation practice as she moves into creating work using video as the primary medium. She dubs these new works video comments since they are no more than 8 minutes in length and are done in a series format.Vicki Meek currently spends time as Chief Operating Officer and Board Member of USEKRA: Center for Creative Investigation, a non-profit retreat for creatives in Costa Rica founded by internationally acclaimed performance artist Elia Arce. She is also Dallas Mayor Eric Johnson’s at-large appointment to the Arts and Culture Commission and the Public Art Committee and President of Friends of the South Dallas Cultural Center. She is represented by Talley Dunn Gallery in Dallas, Texas.

Jeff Rane, Artistic Producer, Uptown Players, began his acting career in high school and attended the Meadows School of the Arts at Southern Methodist University with a minor in music and a major in Business Administration at the Cox School of Business. Upon graduating from SMU, Jeff performed and was assistant manager at a local dinner theatre. After the dinner theatre closed, he returned to the world of business with American Airlines as a Manager in their Revenue Management Department, but continued acting, performing at many Metroplex theatres. In 2001, he formed Uptown Players, along with business partner Craig Lynch. Uptown Players mission is to present plays and musicals that allow LGBTQ audiences to see their life experiences on stage. He became an Artistic Producer after years of being an actor so that he could combine his education in both business and music and ensure that important pieces of theatre were produced in Dallas. In 2009, Jeff was recognized as a future pioneer in LGBTQ arts by the Dallas Voice. In 2016, Jeff retired from the world of business with American Airlines to focus all his time on Uptown Players.

Rev. Dr. Neil Thomas is the Senior Pastor of Cathedral of Hope of Dallas, a congregation of the United Church of Christ was called and elected by the 3,500 member congregation on April 12, 2015, following a year-long search. He began his tenure on June 3, 2015.

Dr. Thomas previously served for 13 years as the Senior Pastor of the Founders Metropolitan Community Church, Los Angeles, the founding church of Metropolitan Community Churches, an international movement of churches reaching in and beyond the gay, lesbian, bisexual, trans, queer, questioning, and inter-sex community.  Dr. Thomas is a contributing author of Daring to Speak Love’s Name(Penguin Books, 1993), From Queer to Eternity (Cassell, 1997), The Queer Bible Commentary (SCM Press, 2006) wrote a chapter for a book entitled, Jesus Acted Up: Then and Now. He has also been featured in a number of journals relating to queer theology and ministry to the LGBTQ community.  Dr. Thomas is the father of a 6 year old daughter.