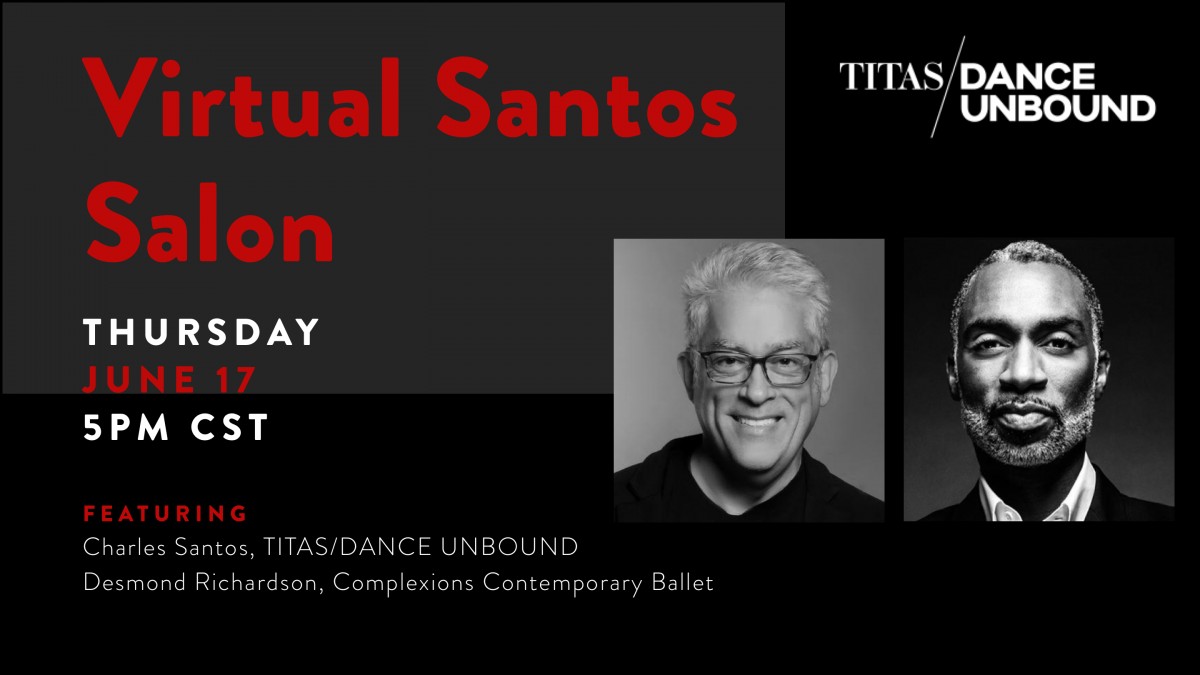 Join TITAS/DANCE UNBOUND’s Executive Director, Charles Santos, on Thursday, June 17th on Facebook Live for a discussion with Desmond Richardson, Co-Founder and Co-Artistic Director  of Complexions Contemporary Ballet. This virtual conversation will go into the background and artistry of their upcoming June 19 performance in Dallas - giving you a behind the scenes glimpse of the show and how the company has persevered through the COVID-19 pandemic.

Desmond Richardson was the first African-American principal dancer of American Ballet Theatre, and is hailed by The New York Times as one of the greatest dancers of his time. Nominated for a Tony Award for his role in the original Broadway cast of Fosse and deemed a standout in the Tony-Award winning production After Midnight, Richardson is highly esteemed by the concert dance and American theater community. He appeared in Twyla Tharp’s Broadway production Movin’ Out, and had his singing debut in Burt Bacharach’s and Hal David’s The Look Of Love, choreographed by Ann Reinking and Scott Ellis.

Richardson, a Young Arts Finalist and Presidential Scholar, has received numerous awards including the Dance Magazine Award, Capezio Award, Ailey Apex Award, L.A. Ovation Award, Bessie Award, YoungArts Alumni Award, and most recently the Roosevelt “Rosey” Thompson Award presented by the Presidential Scholars Foundation.  In the spring of 2109, Richardson received an honorary doctorate degree from The University of North Carolina School of the Arts in recognition of his extensive contributions to the field of dance.

​Richardson has been a celebrity guest performer and choreographer for productions across media such as the American Music Awards, the Academy Awards, City Center’s Encores! series, Italy’s AMICI, and international franchises of So You Think You Can Dance. Richardson has been featured by famed artists such as Michael Jackson, Prince, Madonna, Elton John, and Aretha Franklin, and he appears in celebrated films such as the Oscar-Award winning Chicago, Julie Taymor’s Across the Universe, and the recent independent film, Fall to Rise. He has worked with fashion icon, Tom Ford, Chic’s Nile Rodgers, and recently contributed to Grammy-Award winning Jill Scott’s video Back Together, which features dancers from COMPLEXIONS.

​Internationally and domestically, he is a master teacher for dance programs such as the New York’s All Stars Project, YoungArts Miami, United Way, The Pulse, NYCDA, and ASH. He served as co-creative director and choreographer with David Monn for the Park Avenue Armory Gala Masquerade. Richardson is currently guest artist in residence at USC’s Glorya Kaufman School of Dance and is the visiting adjunct professor of dance at Southern Methodist University.