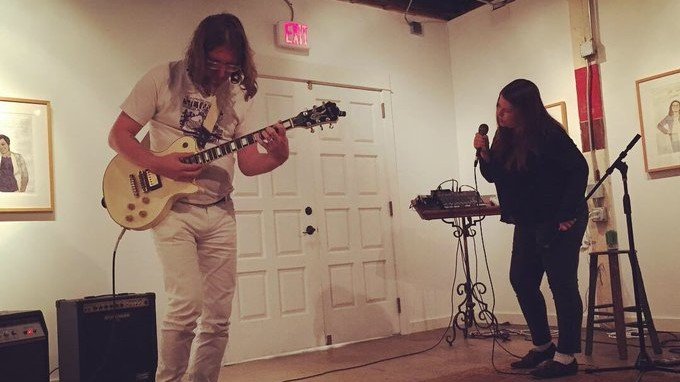 Welcome back to the Six Foot Love series at The Wild Detectives. A series of live outdoor performances with numbered and limited tickets.

Charalambides founders Tom and Christina Carter dedicate themselves to a vision of iconoclastic music as a transformative force. Touching on the outer limits of acid folk, psych rock, and improvisation, their music remains uniquely personal and consistent through apparently extreme shifts in sound and performance tactics.

The group formed in Houston, Texas in 1991 amid a flock of fearlessly exploratory rock bands, including stoner rock pioneers The Mike Gunn (which Tom co-founded in 1989). Charalambides—initially a trio—played a few shows before reverting to a duo and releasing Our Bed Is Green on cassette in 1992. Our Bed Is Green’s low-fi, avant-bedroom aesthetic attracted the attention of Philadelphia’s Siltbreeze records—famed for their injection of The Dead C, the Shadow Ring, and Harry Pussy into adventurous American skulls—who released Union and Market Square, the first two Charalambides LPs, to a wider freak-rock audience.

Charalambides went on to produce dozens of LPs, CDs, and cassettes on various other labels, including Eclipse, Time-Lag, and Kranky, sometimes as a trio—first with guitarist Jason Bill, and later with pedal steel player and vocalist Heather Leigh—before finally cementing their duo configuration in 2004.

From their 2006 Kranky release A Vintage Burden through 2011’s Exile, Tom and Christina reaffirmed their dedication to song-as-mantra. Yet other recordings (like 2001’s Unknown Spin) whisper of interstellar voids filled with silence, while others (like 2004’s Joy Shapes) howl with fiery catharsis and gnosis. Charalambides: Tom and Christina Carter, their 2018 2xLP on Drawing Room Records, is their most current offering.

Christina and Tom have both operated their own labels, Many Breaths and Wholly Other respectively, where they have released their work with each other, as solo artists, and as members of other collaborations. Through their individual trajectories, they’ve worked with artists such as Loren Connors, Marcia Bassett, Bardo Pond, Ingebrigt Håker Flaten, Lisa Cameron, Helena Espvall, and Pete Swanson.