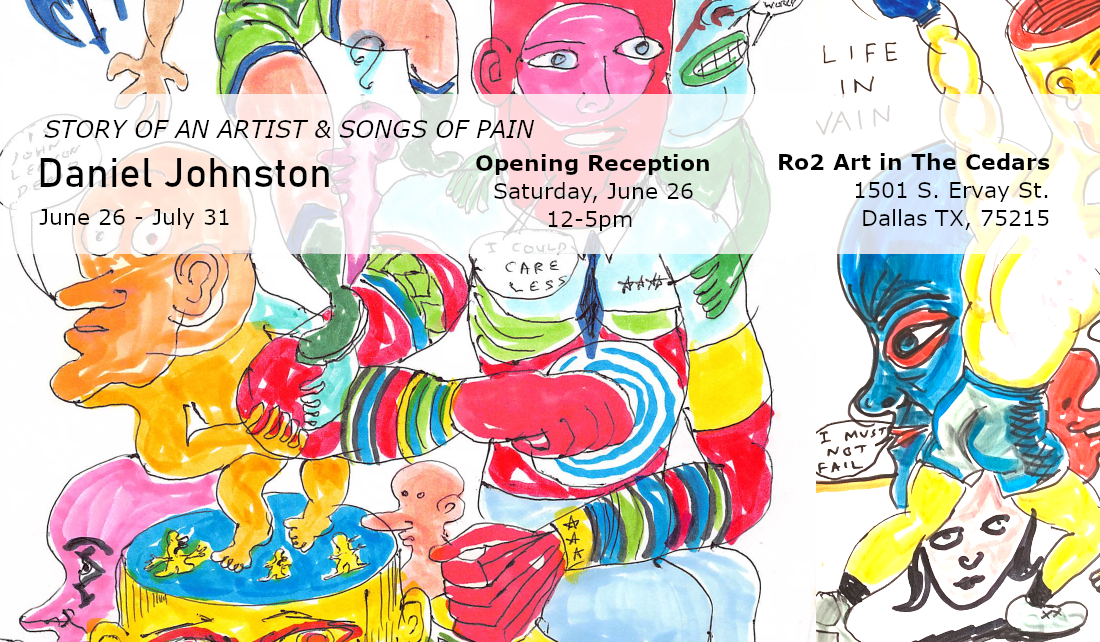 Ro2 Art is proud to present The Story of an Artist & Songs of Pain, a retrospective featuring works by artist Daniel Johnston. The exhibition will run from June 26 through July 31, 2021. The exhibition will open with a casual reception at Ro2 Art in The Cedars, located at 1501 S. Ervay St, Dallas, TX and will take place from 12-5 PM.

Daniel Johnston (1961-2019) was a self taught visionary artist and musician who used his art to plumb the depths of his longing. This collection of drawings and collages, spanning 1978-2019 explore the artist’s personal mythologies as he yearned for acceptance, while trying to separate fantasy from reality.

In work from the '70s and '80s are the first appearances of characters that remained in his art for the rest of his life: eyeballs of various forms, a female torso, super heroes, ducks, polka dot shorts, cubes, open skulls, and Satan. During this time, Johnston used found paper, usually retrieved from trash cans, typing paper or notebook pages as surfaces. Sometimes there is bleed-through of images from the other side. This feature of the brittle material serves as a poignant metaphor for themes found within it, meditations on death, love, emotional pain, fame, mental illness, and potential damnation. His earliest collage is from this era.

As his work progresses through the '90s and early 2000s, we see material changes. Johnston begins using cardstock, and it becomes his substrate of choice. Symbols created during this era include clocks, arrows, an atomic swirl and peace signs. Here, his ducks transform and grow human arms and legs. Also, the density and complexity of his compositions increases. Diagonal horizons appear, while compound planes of depth are populated by silhouettes of birds or humanoids.In This Stinks, Johnston creates several figures with heads rendered completely flat, almost as if the very top of the head had been chopped off. The top most flattened head serves as a platform for an orange duck to stand on with a speech bubble that reads “It’s a Big World”. The head it is standing on says “I’m Scared of The World”. The interplay of the figures in this way reveals hidden layers of multitudinal emotional states.

His work from 2016-2019 saw the resurgence of his collage technique, using minimal source material to give birth to figures cartoonish, demonic and whimsical. Many of these works are overlaid with lyrics from Johnston’s songs. These are collaborative works with his sister Marjory, who filled in the negative spaces with words from the artist’s songs.

Much like William Blake’s self-created pantheon of fairies and goddesses, Johnston shaped characters drawn from pop-culture and his own psyche to represent larger competing inner forces. Temptation, loss, and the creative urge battle across his compositions, rendered frenetically in primary colors. These tensions are sometimes personified through Captain America, representing all that is good, or a floating female torso, symbolizing both unrequited love and sinful desire.

In 2005, Jeff Feuerzeig directed a documentary about Daniel’s life and work titled The Devil and Daniel Johnston, which won The Documentary Award at the Sundance Film Festival. The next year, Daniel Johnston’s drawings were included in The 2006 Whitney Biennial. In September, 2021, the Austin Contemporary will present the first solo museum exhibition of the art of Daniel Johnston.

Daniel Johnston was born in Sacramento, California and grew up in New Cumberland, West Virginia. His childhood was a mixture of care, love, and the constant threat of eternal damnation for non-conformity. As a teenager, he came upon a hanging dead dog. He began drawing free floating eyeballs on every surface he could find, calling it a “dead dog’s eye”. Influenced by comic books and The Beatles, in later works these eyes would become symbols for innocence and paranoia. His compulsion for drawing led him to study visual art at Kent State University, where he met and fell in love with a fellow art student who went on to marry an undertaker and work at a funeral home.

In the early '80s he joined a circus, which eventually set him on the path towards living in Austin, Texas. Though battling schizophrenia and bipolar disorder while working at McDonald’s, Johnston was able to self-record the 1983 album Hi, How Are You? with a cover image he drew in marker. At the time, he did not have a tape duplicator, so he would sing and play the album in its entirety to make copies, which he handed out to people for free around Austin. His drawing of Jeremiah the goofy, yet otherworldly frog became ubiquitous, and ultimately a symbol for the city and its DIY culture. This same drawing, worn as a t-shirt by Kurt Cobain helped catapult Johnston into the status of a cult icon.

No matter the context, Daniel Johnston never stopped being an unguarded version of himself. This is a super heroic feat when one thinks about all the social fictions and emotional self-regulation it takes to navigate the world each day.

What shines through brightly in every piece, in every song is the desire to be understood – to express inner truth no matter how raw. This is why his art is deemed “outsider”, society has to cloak our truths in metaphors, or sarcasm; always a wall of artifice to keep us from being truly vulnerable with each other.

In the year preceding his untimely death from an apparent heart attack in 2019, the mayor of the city of Austin declared January 22, Daniel Johnston’s birthday, as official “Hi, How Are You? Day.” On this day, Austenite's are encouraged to check in on friends and loved ones. Founded by Tom Gimbel and Courtney Blanton with support of the Daniel Johnston Foundation, the Hi, How Are You Project is a non-profit organization that forms new dialogue around mental health issues, and in this way, continues to honor Johnston’s life and work.

Ro2 Art is a contemporary fine art gallery with spaces in The Cedars Neighborhood and Downtown Dallas, representing a diverse group of emerging, mid-career, and established contemporary artists – many with ties to the North Texas Region. The gallery, founded in 2010 by mother-and-son partners Susan Roth Romans and Jordan Roth, regularly collaborates with organizations such as The MAC and Cedars Union, and maintains an exhibition program within the Metropolitan Building Downtown and other satellite venues. Ro2 Art has twice been named Dallas Observer's Best Art Gallery and was presented with the 25th Annual Obelisk Award for small business by the North Texas Business Council for the Arts. The gallery’s art fair program has included the Dallas Art Fair, Texas Contemporary, and Art Aspen. More info: http://www.ro2art.com