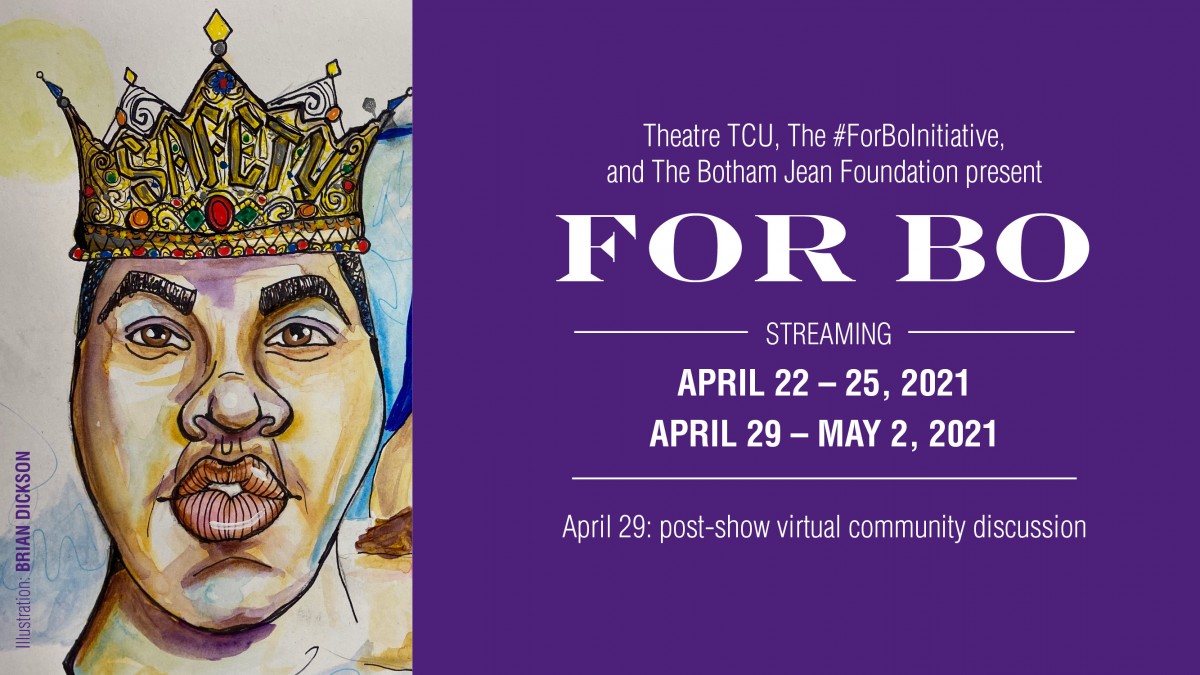 For Bo: A Play Inspired by the Murder of Botham Jean by Officer Amber Guyger - Virtual Event

WHO: Theatre TCU, The #ForBoInitiative and The Botham Jean Foundation present For Bo: A Play Inspired by the Murder of Botham Jean by Officer Amber Guyger

WHAT: Through a fictional narrative, the new original play For Bo explores the issues that led to Botham Jean’s death in 2018 at the hands of Dallas police officer Amber Guyger. For Bo, which debuted as a staged reading on the TCU campus in February 2020, is written by Theatre TCU faculty member Ayvaunn Penn. She was inspired to write For Bo while closely following media coverage of the aftermath of Jean’s death, including watching the murder trial of Amber Guyger unfold in real time.

Performances of For Bo will be presented virtually via online streaming across two weekends. The play is co-directed by Penn and senior theatre and writing double major Ashley Parks. Theatre TCU students provided designs and vocal talent that bring to life illustrations created by members of the TCU and other communities. Community illustrators include artists from Dallas-Fort Worth and beyond ranging from middle school to professional. Additional illustrations were created by students at Botham Jean’s alma mater Harding University in Arkansas, Fort Worth’s Young Women’s Leadership Academy, Austin College in Sherman, Texas, Pratt Institute in New York and more.

Following the April 29 performance, Penn will be joined by intercultural and interdisciplinary professionals as well as special guests Allison Jean and Allisa Findley, Jean’s mother and sister, in a virtual community panel* to facilitate conversations of cross-cultural understanding.

The #ForBoInitiative, founded by Penn, strives to promote the use of the arts as a catalyst for positive social change. The initiative provides arts organizations and institutions with guidance and tools to host their own productions or readings of For Bo paired with community discussions to eradicate racial bias, racial injustice and police brutality.

WHEN & WHERE: Eight performances of For Bo will be presented virtually via Theatre TCU’s Vimeo channel.

TICKETS: Admission to the virtual performances and community panel is free; a donation to The Botham Jean Foundation is suggested. Advanced registration is required beginning Friday, April 16 via the For Bo event page. A streaming link will be sent to registrants when it is available.