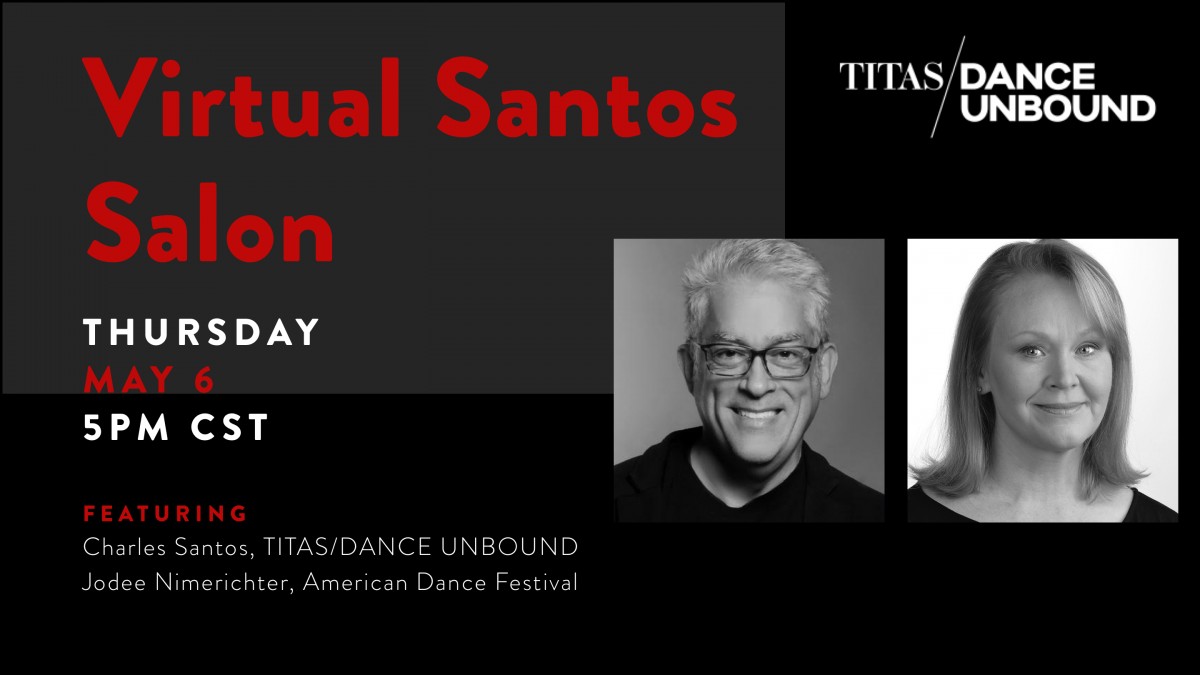 Tune in on Thursday, May 6th 5pm CT on Facebook Live for this conversation. If you missed this event, or a previous salon, visit the Video tab on our Facebook page. TITAS/DANCE UNBOUND is a dance only presenter and a catalyst for cultural collaborations. Our Virtual Santos Salon series is designed to bring our arts community together and create meaningful conversations during this difficult time. Artists need to come together, support each other, and have these conversations so we can ensure that all voices are heard, now and in the future.

About the Speakers Jodee Nimerichter was appointed ADF Director in January 2012. During her tenure, she has expanded outreach and performance programming, created new collaborative partnerships, produced performances in New York City, and launched the successful $3 million Shall We Dance campaign that allowed the festival to purchase its first year-round studios. Ms. Nimerichter served as the festival's Associate Director from 2003 to 2007 and Co-Director from 2007 to 2011. She also worked for the festival from 1991 to 1999 in numerous capacities, beginning as an intern. In 1997, she joined the production team for ADF’s Emmy Award-winning series, Free to Dance, a three-hour documentary on the African American presence in modern dance for which she was nominated for an Emmy. Prior to returning to ADF, Ms. Nimerichter was a production member of Great Performances: Dance in America at Thirteen/WNET New York, where she co-produced a number of documentaries and television productions. Ms. Nimerichter graduated from New York University (NYU) with a degree in performing arts administration. During college she held internships at ADF, Jacob's Pillow, and Changing Times Tap Dancing Company. Jodee has served on the boards of Arts North Carolina, Mark Dendy Dance & Theatre, and Durham Central Park as well as the advisory board of Emory College Center for Creativity & Arts and is currently the President of the ADF boardCharles Santos has served as the Executive Director and Artistic Director of TITAS/DANCE UNBOUND since 2001. In his role, Charles oversees all aspects of TITAS including curation, programming, contract negotiation, and financial management. His skilled artistic vision has brought brilliant international artists to Dallas, accompanied by extensive community engagement to our community. Under his guidance, Santos has established TITAS and the City of Dallas as a significant entity on the international cultural landscape. Prior to TITAS, he founded the Austin Festival of Dance and served as the Managing Director/Development Director for Eos Orchestra, Producer for Dancers Responding to AIDS-BC/EFA, and Managing Director/Producer of the Lower Manhattan Cultural Council.