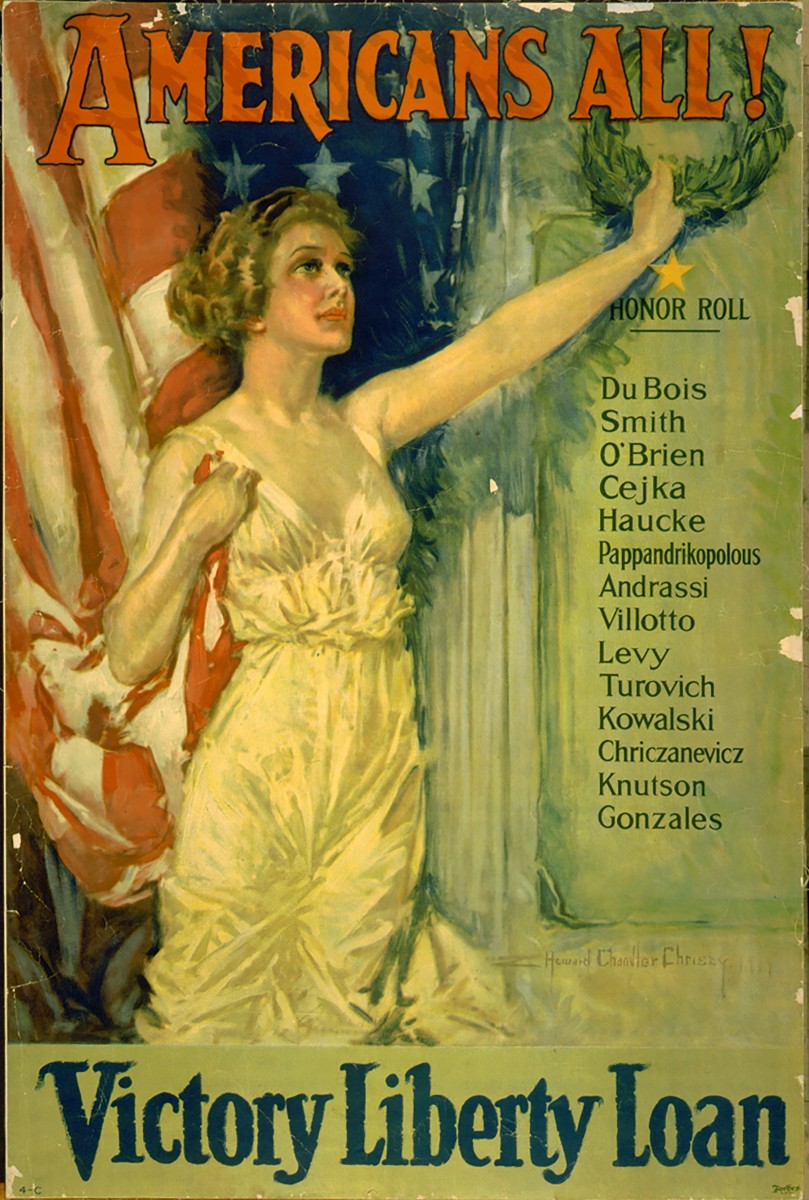 WW1 America invites audiences into a nuanced understanding of World War I as a transformational event in American history, a compressed and convulsive time of social, economic, and political change, a lens through which to understand what it means to be “modern.” WW1 America is on view April 9 through May 25, 2021 at Irving Archives and Museum. Although it was fought thousands of miles away, the war transformed the United States from a relatively provincial power on the world stage to a full-fledged global, military-industrial leader, held together by a newly powerful federal government and charged with confident patriotism. This is the America that dominates popular memory: the saturated hues of patriotic posters, jubilant crowds at Liberty Loan rallies, the ranks of manly Doughboys, and hearty choruses of “Over There.” And yet there were darker sides of the American experience during the years 1914 to 1919: entire swaths of US cities engulfed in racial conflagrations; workers striking by the millions; women demonstrating in the streets demanding the right to vote; immigrants harassed and deported; dissenters and “hyphenated” Americans pursued, surveilled, jailed, or lynched; and violent disagreements about the nature of civil liberties. The American stage during and just after World War I witnessed sharp challenges to virtually every familiar boundary—those of citizenship, gender, race, class, nationality, generation, culture, not to mention traditional assumptions about foreign entanglements. As the war came to an end, making the “world safe for democracy” may have actually seemed easier than making democracy even possible for millions of Americans at home. And if the war did not have a precisely causal effect on social change during the period—for issues such as woman suffrage, African American migrations, Prohibition, labor struggles—it was nonetheless always in dialogue, sometimes violently, with the day’s upheavals, shaping the nation in profound and lasting ways. Indeed, so many issues from this period cascade down the years to our own time. WWI America explores vitally important stories of a transformational and divisive era, for a broad, multi-generational audience. The exhibition is visually dynamic, with large-scale photographs, moving images, multimedia environments, and re-created settings such as a music shop and grocery store. It is also a socially interactive forum, with stories and many period artifacts supported by authentic voices expressing competing views. From the brutal realities of war to the vivid delights of popular culture, WW1 America offers visitors an engaging and compelling evocation of the many dimensions of this period, as well as an entry point into thinking about and making sense of our own times. WW1 America is made possible by NEH on the Road, a special initiative of the National Endowment for the Humanities, which provided major funding support. It is adapted from the Minnesota History Center’s exhibition WWI America, and toured for NEH on the Road by the Mid-America Arts Alliance. IAM receives support from the Friends of the Irving Museums. Additional funding has been provided by Humanities Texas and the National Endowment for the Humanities (NEH) as part of the federal CARES Act.

The original WW1 America exhibition was created by the Minnesota History Center in partnership with the National Constitution Center, the National World War I Museum and Memorial, the Oakland Museum of California, and the Bob Bullock Texas State History Museum, and was supported by major grants from the National Endowment for the Humanities.

Thank you to the Friends of the Irving Museums!