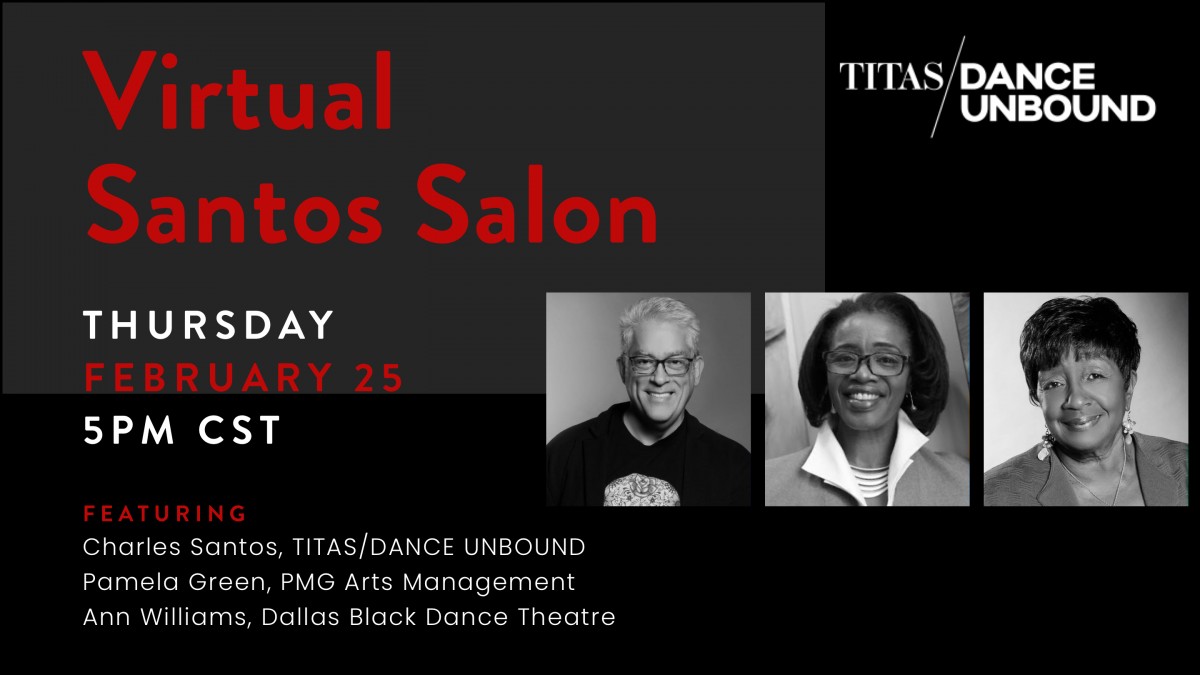 Companies of Color in America: A Conversation with Pamela Green and Ann Williams

Thursday, February 25, 5pm CST, join TITAS/DANCE UNBOUND’s Executive Director, Charles Santos, for a live conversation with the Founder and President of PMG Arts Management, Pamela Green, and the Founder of Dallas Black Dance Theatre, Ann Williams. This salon conversation will focus on the influence of companies of color in America, challenges they have faced, and how they are inspiring the next generation of BIPOC artists across the globe.

Pamela Green is the Founder and President of PMG Arts Management. She graduated from Duke University with a BA in Public Policy and a minor in Drama. She began her arts administration training as an intern at the Durham Arts Council and furthered her experience working for the American Dance Festival as Space and Equipment Coordinator and Central Services Director. She was managing director of the Chuck Davis African-American Dance Ensemble from 1985-1989 and Director of Touring and Presenting for the North Carolina Arts Council from 1989-1992.

In 1992, Mrs. Green founded her own company, PMG Arts Management, to provide booking, management and consulting services to performing artists, companies and organizations throughout the country. PMG Arts Management currently represents established and emerging artists, including the renowned Ronald K. Brown/Evidence, Camille A. Brown & Dancers, Philadanco!, and has produced special projects with jazz singer Nnenna Freelon. She also consults with Rosie Herrera Dance Theatre and Helen Simoneau Danse. Mrs. Green is honored to have worked as the exclusive booking agent for the Chuck Davis African-American Dance Ensemble, Cleo Parker Robinson Dance Ensemble, and Dalton Hartel Dance when she founded PMG in 1992. Some career highlights include her production and tour arrangements for Evidence’s collaboration (Blueprint of a Lady: The Once and Future Life of Billie Holiday) with Grammy nominated vocalist Nnenna Freelon, and the acclaimed tour of Evidence’s One Shot featuring the photography of the late Charles “Teenie” Harris. She also co-produced and arranged the multi-year tour of Nnenna Freelon in collaboration with Maya Freelon and Kariamu Welsh’s tribute to the legacy of African-American washerwomen, The Clothesline Muse. She has been instrumental in the career development of Camille A. Brown & Dancers and Rosie Herrera Dance Theatre. She and her staff have helped produce, tour and provide creative development support for Camille A. Brown’s trilogy of African-American identity works. Mr. TOL E. RAncE, BLACK GIRL: Linguistic Play and ink and Herrera’s premier of her latest work Make Believe.

Ann Williams founded Dallas Black Dance Theatre in 1976. She is a founding member of the Dance Council of North Texas, the Advisory Board of the Booker T. Washington High School for the Performing and Visual Arts and The International Association of Blacks in Dance.

She received her early dance training under Barbara Hollis (a member of the Katherine Dunham Dance Company), Edith James, Doris Humphrey, and Charles Weidman. She received additional training under Alvin Ailey and Arthur Mitchell. Ms. Williams is a graduate of Prairie View A&M University and the first African American to earn a Master of Arts Degree in Dance and Related Arts from Texas Woman’s University. She was honored as a “distinguished alumna” by both Universities in 1990. She holds a certificate in Arts Management from Texas A&M University, received an honorary Doctor of Humanities from Northwood University, and in May 2008 was awarded an Honorary Doctor of Philosophy in Dance from TWU. She served six years on the Texas Woman’s University Board of Regents. She is a 2002 inductee into the Texas Women’s Hall of Fame; and in April 2005, she was honored at The Kennedy Center in Washington D.C. as a part of the Masters of African–American Choreography series.