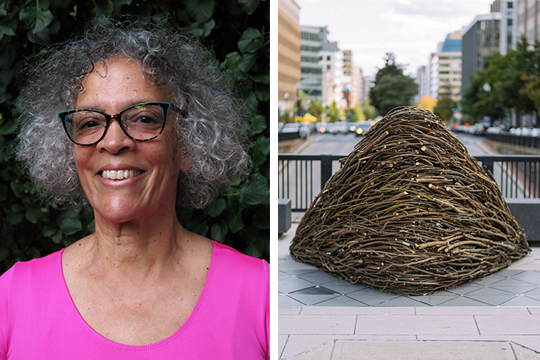 Join us online for a new way to experience an artist talk, featuring powerful video and live conversation with multidisciplinary artist Maren Hassinger. For over five decades, Hassinger has explored connections between politics, communities, and the environment through dance, performance, video, and an approach to materials that transforms the industrial into the poetic.

Advance registration required. FREE for Nasher Members / $5 for non-members. Nasher Members will have exclusive access to the recording of the live conversation after February 25.

Born in Los Angeles in 1947, Maren Hassinger has worked in sculpture and performance since the early 1970s. In 1965, she enrolled at Bennington College to study dance but ended up focusing on sculpture, encouraged by her teacher, the artist Isaac Witkin. She returned to Los Angeles in 1970 to enter graduate school at UCLA, enrolling in the university’s new Fiber arts program. There she received encouragement from artist Bernard Kester, who supported her in receiving the first MFA in Fiber arts in 1973, and in whose class she first worked with wire rope. In Los Angeles, she became part of an experimental art and performance collective that included David Hammons and Senga Nengudi. (Hassinger continued to collaborate with Nengudi and is frequently the performer seen in photographs of Nengudi’s sculptures.) In the context of these activities, she began working with wire rope in works of Land art, installation, and sculpture, and a concern for humanity’s connections to nature have persisted in her work; in later years, her practice has expanded to include video and such materials as tree limbs, plastic bags, and newspapers. Additionally, she has also frequently collaborated with her daughter, artist Ava Hassinger, on videos, exhibitions and other projects.  From 1997 to 2017, Hassinger served as dean of the Rinehart School of Sculpture at the Maryland Institute College of Art. She has exhibited widely, with a 2015 retrospective at the Spellman College Museum of Fine Art, and public art projects for the Studio Museum, Harlem and the Smithsonian American Women’s History Initiative. She has also been included in such significant group shows as the Hammer Museum’s Now Dig This! Art and Black Los Angeles, 1960–1980 and the Brooklyn Museum’s We Wanted a Revolution: Black Radical Women, 1965-85. Her work is held in many prominent museum collections, including the Museum of Modern Art, the Art Institute of Chicago, and the Solomon R. Guggenheim Museum. Hassinger lives and works in New York City.

Please note, this program will take place online. Participants only need to register once per household. After registering, you will receive a confirmation email with instructions on how to participate.

If you do not receive a confirmation email upon registration or have trouble accessing the livestream on February 25, please contact [email protected] or call 214.242.5151.