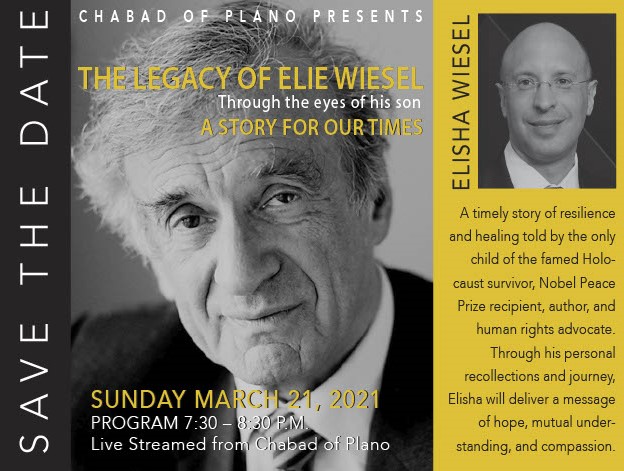 The Legacy of Elie Wiesel through the eyes of his son, Elisha Wiesel

Event: The Legacy of Elie Wiesel, through the eyes of his son, Elisha Wiesel - A Story for Our Times (Livestreamed from Chabad of Plano)

“Civically engaged for decades on state and local levels, Mabrie Jackson has strengthened the fabric of our community,” said Rabbi Menachem Block, Chabad of Plano/Collin County. “She is a role model of optimism during our challenging times and believes deeply in the vital role of diversity and in celebrating the uniqueness and beauty of the many cultures found in our communities.”

Event Description: A timely story of resilience and healing told by Elisha Wiesel, the only child of Elie Wiesel, the famed Holocaust survivor, Nobel Peace Prize recipient, author, and human rights advocate. Through his personal recollections and journey, Elisha will deliver a message of optimism, mutual understanding, and compassion.

“It is a great honor to host an evening that will feature the legacy of Elie Wiesel through the eyes of his only child, Elisha,” said Rabbi Menachem Block, Chabad of Plano/Collin County. "He will share how his father’s wisdom and understanding, gleaned through the horrors of the Holocaust, are relevant and meaningful today as we struggle as a society to reach a place of mutual respect and acceptance.”

Elisha Wiesel, the only child of Elie Wiesel, recently retired from a 25-year financial markets career as chief information officer at Goldman Sachs. During that time, he was instrumental in the resurrection and fundraising success of a unique all-night event involving hundreds of finance professionals solving puzzles on the streets of New York. The event has raised millions for New York youth and families in need. Since his retirement, he served as the technology lead for digital marketing in the Mike Bloomberg presidential campaign. Most recently, he has joined the Israeli fintech startup, The Floor, as chairman of its board of directors. He has been using his time in quarantine to learn Metallica songs on guitar from his son and Tik Tok dances from his daughter as well as to organize his father's archives, learn a little Talmud every day, and to obey his wife and mother.

When his father passed, Elisha realized many missed his voice. This has led him to speak from time to time about his father's legacy and share his message when the right opportunities arise for impact. “My father never forgot. The things he saw stayed with him all the days of his life. He lived to speak of them to me and to my children. My father became the witness for the six million murdered Jews.”

Elie Wiesel was a Nobel-Prize winning writer, teacher and activist known for his internationally acclaimed memoir Night, in which he recounted his experiences as a teenager surviving the Holocaust and brought real awareness of its horrors to the public consciousness. Born on September 30, 1928, in Sighet, Romania, Elie Wiesel pursued Jewish religious studies before his family was forced into Nazi death camps during WWII. Wiesel survived, but his parents and little sister perished. Praised as a “messenger to mankind” by the Nobel Committee, Wiesel penned more than 50 books and became an activist, orator, and teacher, speaking out against persecution and injustice across the globe. He was the founding chairman and leading force behind the establishment of the United States Holocaust Memorial Museum. He was awarded the Presidential Medal of Freedom, the U.S. Congressional Gold Medal, the Medal of Liberty Award, and the rank of Grand Officer in the French Legion of Honor. Wiesel, who became a United States citizen, lived with his wife and only child, Elisha, in New York City. Soon after he received the 1986 Nobel Prize for Peace, he and his wife established The Elie Wiesel Foundation for Humanity. Wiesel died on July 2, 2016, at the age of 87, leaving a legacy of calling for people to stand and speak out against injustice and bigotry.

About Chabad of Plano/Collin County

Chabad of Plano/Collin County is a 501(c)3 non-profit organization dedicated to providing educational and social programs for families and children across Collin County. www.chabadplano.org

This Fairy Godmother Reads Stories – And Teaches Kids To Boogie