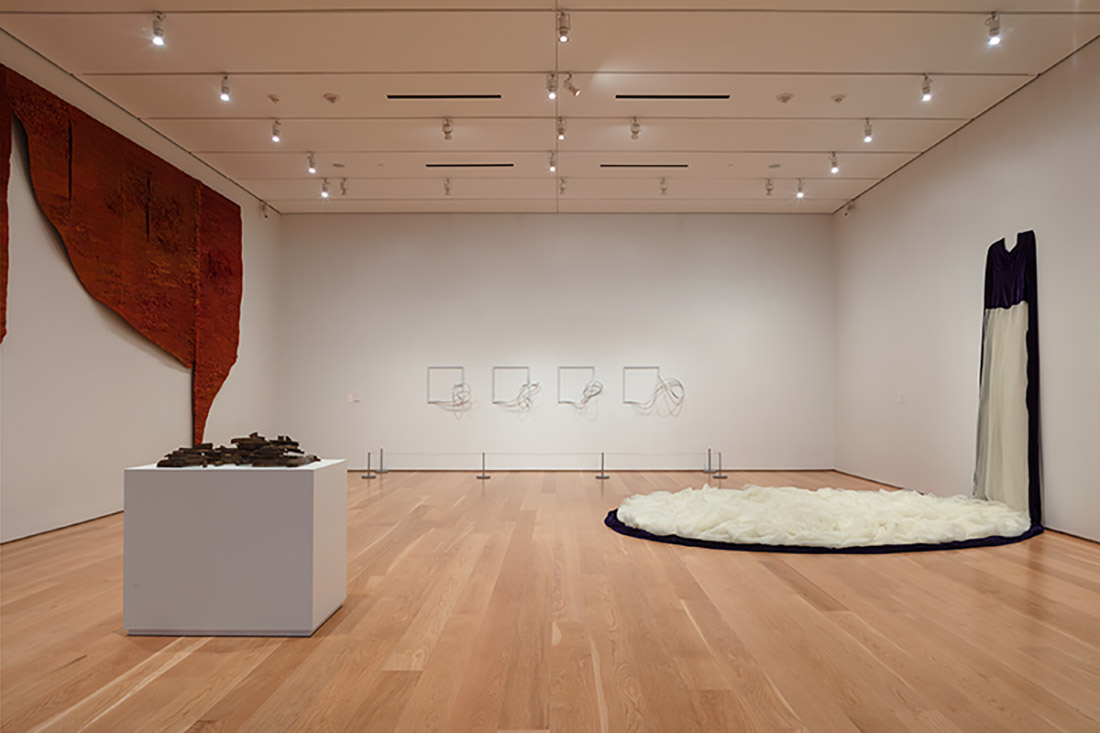 The Nasher Sculpture Center presents a dialogue between forms of resistance and release in sculptures by several artists, including newly-acquired works by Magdalena Abakanowicz and John Chamberlain.

According to French writer André Gide, "Art begins with resistance—at the point where resistance is overcome. No human masterpiece has ever been created without great labor." Often, the most powerful ideas in art are those that resonate in multiple ways, from the concepts that inform artistic process to the physical act of making. Gide’s statement about the origin of great works of art did not specify the type of resistance he had in mind, but artists have often found inspiration in materials that seem to resist them. Garth Evans warped plywood into unexpectedly graceful curves; John Chamberlain’s urethane foam sculptures only keep their shape as long as tightly knotted pieces of twine hold them together.

Taking wood, foam, and other materials to the furthest limits of physical possibility can introduce considerations of other, less tangible forms of resistance. Central to modern liberation movements and contemporary forms of political protest, resistance—whether passive or active—is often the first line of response to actions deemed unjust or unacceptable. Modern artists (and modern writers such as Gide) frequently understood resistance as a revolt against tradition, but more recently resistance has also been embraced by artists who have struggled to be accepted due to their gender or race. During the 23 years of Dorothy Dehner’s marriage to David Smith, he discouraged her pursuit of sculpture, which she was only free to take up after leaving him in 1950. Magdalena Abakanowicz began the large-scale fiber compositions she called Abakans in part as an act of resistance: in her native Poland, men had traditionally dominated the design and creation of tapestries. In turn, Ana Mendieta was a committed feminist but found it necessary to insist upon the importance of her Cuban identity in the context of what she described as “a white middle class movement.”

As crucial as resistance can be, artists have also long recognized the importance of its counterpart in the concept of release. Just as resisting exceeds the possibilities of mere refusal, release is more than giving up or giving in. A necessary counterforce, release provides the opportunity to ease tensions as well as recognize the potential of other approaches. Release is a decisive act of letting go, often apparent as a moment of ease or of disaster averted. Dehner, for example, stopped work on Low Landscape No. 3, initially built up from pieces of wax, before the model could break apart. Likewise, Beverly Semmes embraces the pull of gravity and fabric’s lack of self-support in her composition’s dramatic plunge of organza.