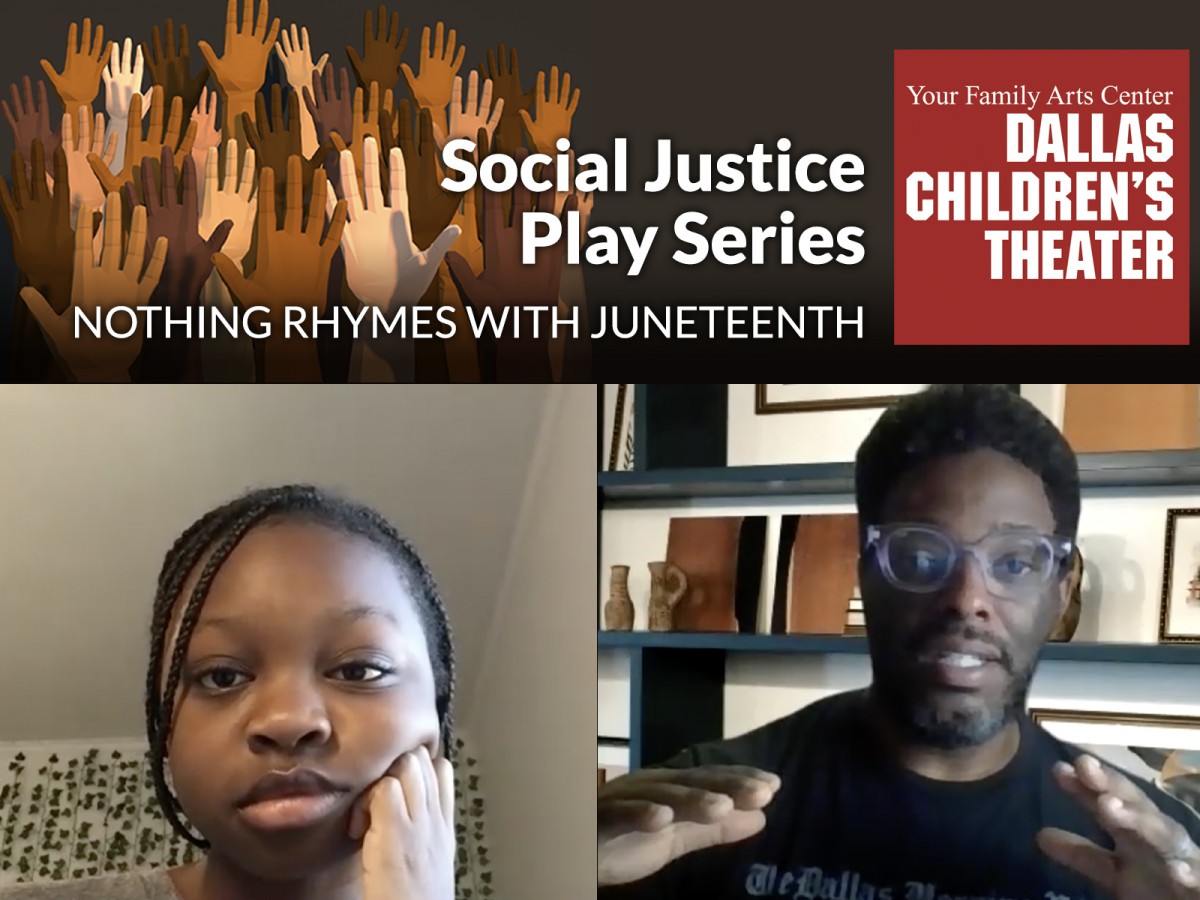 NOTHING RHYMES WITH JUNETEENTH - Virtual Event

Short plays plus talkbacks are great resources for families

NOTHING RHYMES WITH JUNETEENTH October 16 – October 25

Dallas Children’s Theater (DCT) continues its commitment to using the power of theater to spark important conversation about race by producing a series of short plays by award-winning playwright, poet, and changemaker Idris Goodwin. The remaining two short shows, dubbed the ‘Social Justice Play Series,’ will be available completely free of charge at dct.org/ socialjustice/digital over the course of the next two months.

The second show, NOTHING RHYMES WITH JUNETEENTH (recommended for ages 9 and up) finds a parent and child trying to complete a rap for a school presentation and will be directed by Cherish Robinson and premieres October 16th. The third show #MATTER (recommended for ages 14 and up) shows two former high school friends debating matters of life and race will be directed by Feleceia Benton and will premiere November 6th. As part of each play, DCT will offer two opportunities for the public to participate in a talkback hosted on Zoom.  Registration details are located at dct.org/socialjustice/digital.

Dallas Children’s Theater reached out to local actress Denise Lee to produce this series and lead the talkbacks.  While Lee has previously acted in shows at DCT, it was her creation of the movement, Change the Perception, after the 2016 Dallas police shootings that made her an ideal choice for this project.  Lee says, “As the founder of Change the Perception, I am very honored to identify the talented directors to present these plays and just as importantly, I am excited to be conducting the talkbacks for this very special project along with Change the Perception Board President, Thomas Collier. Conversations about racism are very difficult, but so very necessary to have in today's climate.  We hope that parents and their children will use these experiences to begin a dialogue about racism that fosters a belief system that they will be able to build on well after the talkbacks are over.”

NOTHING RHYMES WITH JUNETEENTH

A child and a parent try to complete a rap for a school presentation.