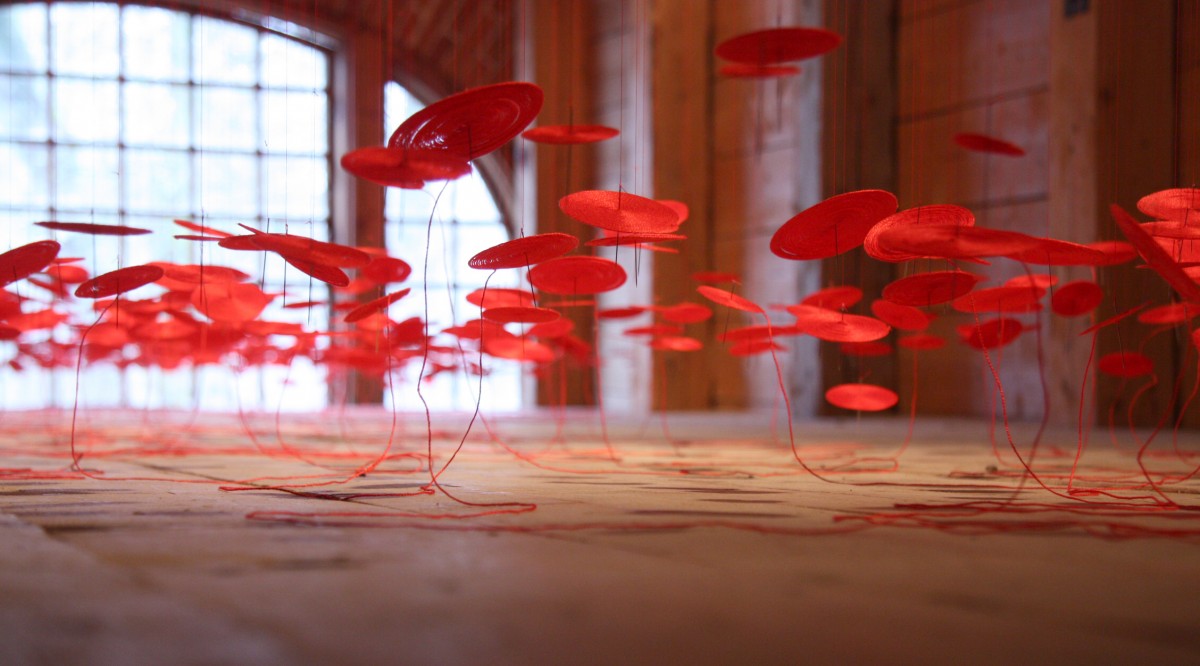 Beili Liu: Lure and Each and Every Exhibitions

The Lure Installation Series borrows from the ancient Chinese legend of The Red Thread, which tells that when children are born, invisible red threads connect them to their soul mates. Over the years of their lives they come closer and eventually find each other, overcoming great social divides or physical distances.

The installation makes use of thousands of hand-coiled disks of red thread, each pierced at the center by a single sewing needle, enabling its suspension from the ceiling. A disk may be connected to another, as a pair; and a pair of disks is made from a single thread. Subtle air currents set the red thread coils swaying and turning slowly as the loose strands of thread on the floor drift and become entangled.

Each composition of the series is designed to carefully respond to the given space and its architectural specificities. Unique compositions of the Lure Series have been previously shown in San Francisco; Los Angeles; Buffalo; Shanghai, China; Fiskars, Finland; Kaunas, Lithuania; Munich, Germany; London, UK; Como, Italy, and Kraków, Poland, among others.

Each and Every/Dallas is a large-scale site-responsive installation and performance project consisting of hundreds of articles of children’s clothing that have been preserved and quieted by industrial cement. Organized to line the gallery floor, yet poised just inches above the ground, the work occupies a rectilinear space that is expansive and penetrates the building’s structure. Though the garments have been transformed by cement, they maintain the drapes, folds, and materiality familiar to fabric. Above the expanse of clothing, hundreds of lines of cement-dipped thread hang in an organic sequence, occupying the vertical space between the floor and ceiling, guiding the viewer’s eyes upwards, offering a sense of hope.

As an artist, mother, and immigrant, the installation and corresponding performance piece was conceptualized in response to the migrant children crisis and the separation of migrant children from their parents at the southern border of the United States. As the title and work suggest, Each and Every/Dallas calls attention back to the individual experiences of these children and their families, generating space for empathy and understanding.

Each and Every was originally commissioned by MadArt Studio, Seattle.