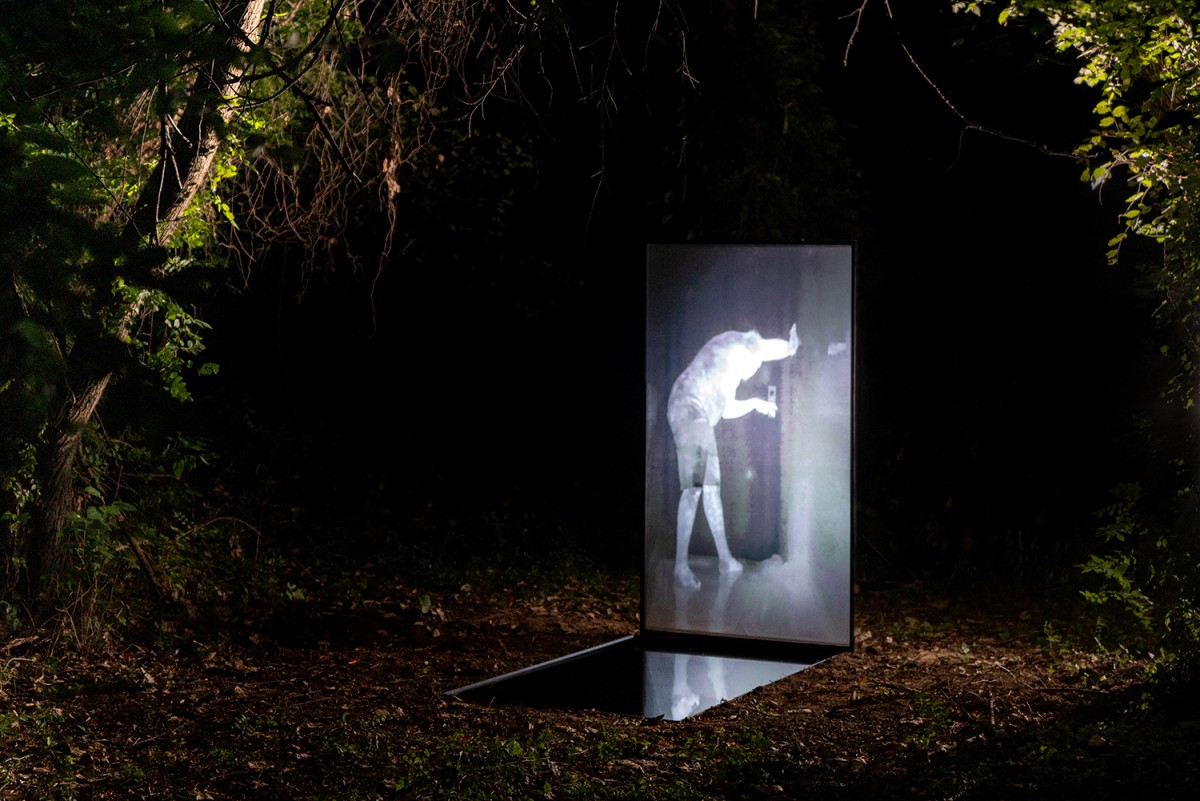 Breath Ascent Reveal is a nighttime video installation by New York-based sculptor Asif Mian. Tucked under the trees, a looping projection sits over a shallow pool which serves as a plinth, doubling the digital image and reflecting the surrounding park - the screen standing as both monument and intimate cinema.

Thermal imaging, often used in drone warfare, has largely made its way into the popular consciousness; tying ideas of surveillance and targeting to bodies of color is, unfortunately, easy to connect. As domestic policing has begun utilizing more and more military tactics and technologies, the thermograph has frequently been used in the surveillance and monitoring of protests, beginning in 2015 and the Baltimore demonstrations after the murder of Freddie Gray. During COVID, this technology has also been adapted into “fever detection” cameras to screen students, travelers, and warehouse workers before they can enter buildings.

Mian uses FLIR Systems’ (a military contractor) prosumer version of their drone camera. Controlled by an app, it indiscriminately records contours of radiant heat. The camera cuts through materials and flesh, erasing features and identity, rendering the body as a shadowy volumetric form. Through its gaze, the performer’s puzzling movements begin to resemble evidence as traces of handprints are left smeared as signatures on walls. A cloaked head becomes a paranormal form, emitting breath as an “ethereal volume”. We sharply cut to a cell phone video, it’s just a guy with a trash bag on his head.

A nesting of containers; the bag, the body, the camera, the frame, the pool. The subject appears disillusioned and seems unaware that he is being watched; he tries to find the edges, looking for ways of leaving and ways to hide. All the while, we return to the essential - the breath.

Asif Mian (b. in Jersey City, NJ) earned an MFA from Columbia University (2018), a B.A. in Studio Art & B.S. in Biology (Genetics) from Drew University and attended the Skowhegan School of Painting and Sculpture in 2018. Mian’s recent exhibitions include Queens International: Volumes at The Queens Museum, Always, Already, Haunting, ‘disss-co’, Haunt, curated by Whitney ISP fellows at The Kitchen, the inaugural Open Call exhibition at The Shed and Beyond Geographies; Contemporary Art and Muslim Experience at BRIC, Brooklyn. Mian was recently presented with the prestigious 2019-2020 Queens Museum-Jerome Foundation Fellowship for Emerging Artist with a forthcoming solo exhibition at The Queens Museum.