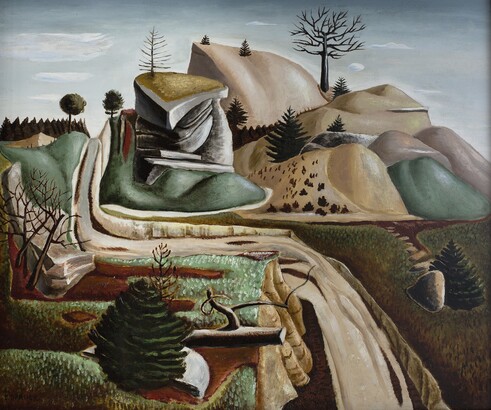 Texas Made Modern: The Art of Everett Spruce

Experience the Texas landscape like you’ve never seen it before. The most celebrated painter from Texas in the first half of the twentieth century, Everett Spruce (1908–2002) was widely collected by museums across the country, including the Metropolitan Museum of Art, the Museum of Modern Art, the Whitney Museum of American Art, and more. His modern, visionary landscapes countered the mythic images of Texas as only a land of cattle and cowboys. Over time, however, with the rise of Abstract Expressionism and Pop Art, Spruce and his work fell into obscurity.

Texas Made Modern: The Art of Everett Spruce resurrects Spruce’s career and returns it to its place in the history of American art. The exhibition traces the evolution of Spruce’s art over fifty years as he adapted his style and subjects to the era in which he worked. The exhibition and its accompanying catalogue bring to light Spruce’s role as not only a key figure in the development of modern art in Texas but as a vital contributor to the narrative of modernist landscape painting in America.