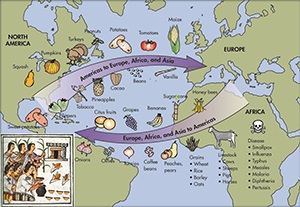 Preserving our Past Community History Workshops

Presented in conjunction with The Center for Texas Studies at TCU, these workshops are aimed at increasing the historical awareness of the community. The series is designed to make the public aware of the important, yet often overlooked historical resources around them, and how to preserve them for posterity. The goal of the workshops is to prove that “every person is a historian,” and that they can, by their deeds and actions, preserve a small part of the cultural and historical fabric of this region.

Join us for the return of our Preserving our Past Community History Workshops with Dr. Peter Martínez! In honor of Hispanic American Heritage Month, Dr. Martínez’s will discuss how crops and foods in the Pre-Columbian Americas impacted European and Asian countries through the Columbian Exchange beginning in the sixteenth century. You will hear how Europeans and Mexican elites viewed indigenous American foods and learn how the relationship between food and cultural identity evolved as European, African, and Indigenous foods and crops to combine to give us foods that are common to us today.

Dr. Peter Martínez serves as an Associate Professor of History at Tarrant County College – Northeast Campus. He earned both his Bachelor’s and Master’s degrees in History from the University of Texas at Arlington and his Doctorate in History from the University of North Texas in 2017. Dr. Martínez’s dissertation, “Ready to Run: Fort Worth’s Mexicans in Search of Representation, 1960-2000,” was awarded Best Dissertation in Tejano/a Studies by the National Association for Chicana and Chicano Studies – Tejas Foco in 2018. He is an active Board Member for HOLA (History of Latino Americans) Tarrant County.

Have you ever wanted to know more about the man behind the museum? Join us for a presentation on Amon G. Carter by Brian Cervantez, who recently published the very first scholarly biography of the Fort Worth giant. After growing up in a one-room log cabin, Carter rose to become a philanthropist and enthusiastic promoter of Fort Worth. He founded the Fort Worth Star-Telegram, established Fort Worth’s first radio station, lobbied for the American Airlines to headquarter in Fort Worth, and secured government funding for an aircraft factory that would later become Lockheed Martin. Carter also funded or helped support various schools, churches, museums, and parks. Drawing from the Amon G. Carter papers at Texas Christian University, Cervantez will detail not only Carter’s life but his continuing influence in Fort Worth and the Southwest.

Brian Cervantez is an associate professor of history and an assistant divisional dean at Tarrant County College. He received his Ph.D. from the University of North Texas in 2011. He has published numerous book reviews in the Southwestern Historical Quarterly and Military History of the West. His first book, Amon Carter: A Lone Star Life, recently won the Coral Horton Tullis Memorial Prize for Best Book on Texas History from the Texas State Historical Association.

How do you picture Texans protecting themselves in public when much of the state was still a frontier? Contrary to popular stereotypes, Texas had some of the strictest weapon regulations in the country during the late nineteenth and early twentieth centuries. During this period, Texas enacted a series of regulations commonly referred to as deadly weapon laws. These laws prohibited the carrying in public of concealable weapons such as pistols, bowie knives, and brass knuckles. Drawing from a wealth of county criminal records, Rivas will discuss why the laws were put in place, how the laws were enforced, and what happened to people who violated these laws.

Brennan Gardner Rivas is currently a lecturer at Texas Christian University. She received her Ph.D. from TCU in 2019. Her article “An Unequal Right to Bear Arms: State Weapons Laws and White Supremacy in Texas, 1836-1900” was published in the Southwestern Historical Quarterly in January 2018. She recently received the Bill & Rita Clements Fellowship for the Study of Southwestern America for the 2020-2021 academic year.

Embrace Autumn At The Dallas Arboretum