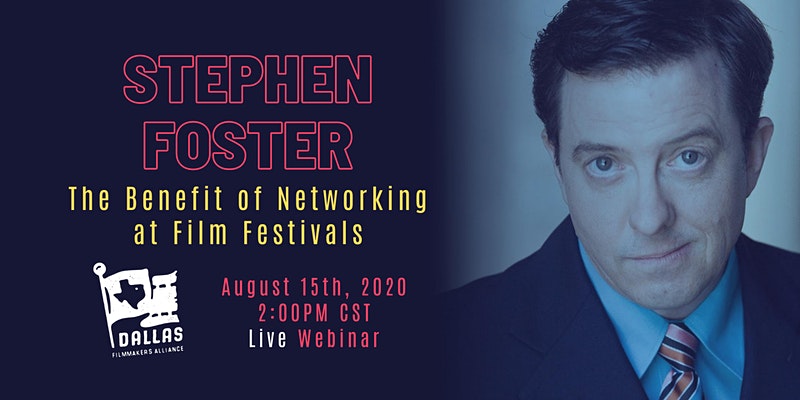 Film Festivals and Networking for your film

Login to your Eventbrite account to view all webinar details

C. Stephen Foster is an award-winning actor/writer originally from Ft. Worth, Texas. Standing at 5 feet tall, his body of work is TALL!

He wrote the acting book “Awakening the Actor Within.’

He is featured in the webseries “Studio Lot,” “Eternity Hills,” “C.P.R.,” “Finding Olivia,” “What’s My Intention,” and “Ground Floor.”

He directed the music videos “Dream Vacation” and “Bad Boys, Black Leather.” He co-produced the music videos: “That Ain’t Love,” “Christmas Came Rushing,” and “Arlington.” His theater credits include: “Divanalysis” played as part of the summer series at the renowned Highway’s Performance Art Space.

He starred as Icarus in the Hollywood Fringe hit show “Seven Dreams of Falling”. Foster co-wrote the screenplay “Clubbed!” which was a finalist in several major contests. As a stand-up comedian he’s played the Comedy Store, Improv and Laugh Factory.

Support our organization we can bring you more events.

Support us by donating at registration

OR become a sustaining member at https://filmindallas.org/membership/

OR Leave us a review on facebook and/or google: https://g.page/filmindallas/review?rc

ng, among many others.