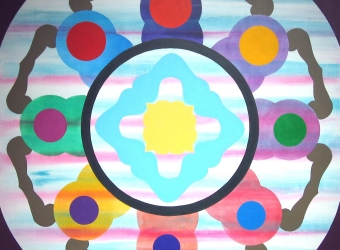 Paintings & Watercolors opens Saturday, February 29, with a preview from 6-8 p.m. Earlier in the day, at 2PM, a gallery conversation regarding the work will take place with Melissa Meyer—a New York artist and friend of Stephen Mueller.

This is the first showing of Stephen Mueller’s work with Barry Whistler Gallery. Mueller (1947 – 2011) grew up in Dallas attending Saturday art classes at the Dallas Museum of Fine Arts taught by Roger Winter.

He received his BFA from the University of Texas, Austin in 1969. Later, he was one of the first males to attend Bennington College; which had gone co-ed the year before. He received his MFA in 1971. At Bennington, he studied with Clement Greenberg and Kenneth Noland and felt the lingering influences of Paul Feeley and Helen Frankenthaler. Prior to Bennington, he spent some time in New York City showing with Richard Fiegen and Tibor de Nagy and meeting Andy Warhol. He returned to New York after Bennington with Annina Nosei and Mary Boone. His meeting Andy Warhol would also lead to his working on Warhol’s “Shadows”—series of paintings first exhibited at Heiner Friedrich Gallery in SoHo in 1979.

Mueller’s exhibition at Barry Whistler Gallery will consist of 12 acrylics on canvas paintings (large and small) dating from 2007-2010, as well as, 7 watercolors dating from 1998-2009.

In that catalogue from that same exhibition at Hunter College, Mueller’s close friend and artist Carl Palazzolo states, “One of my favorite memories is of going over to Stephen’s studio in the afternoon while he would paint with the television on and the sound turned off. The TV would be showing Looney Tunes cartoons from the fifties, those Warner Brothers cartoons with concentric circles at the beginning and end. And I’d look at his canvas and say, “Oh my god, there’s the Looney Tunes image right alongside those mandalas and prayer beads and colors!” In fact, he did a couple of paintings that had those kind of ombré effects, the concentric circles. If you look at a Looney Tunes cartoon they’re right there. That was the kind of cultural mash-up he liked.”

Mueller’s work is held in the collections of the Brooklyn Museum, Whitney Museum of American Art, Denver Art Museum, and the Museum of Fine Arts, Houston.