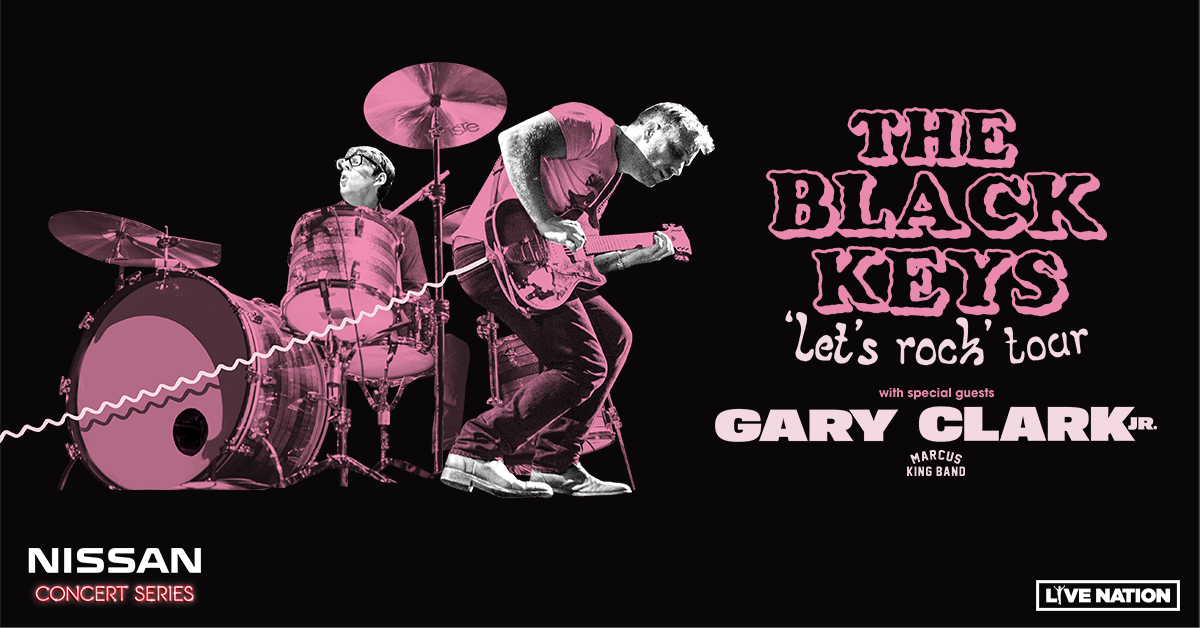 *This show has been canceled. For questions about your tickets, please contact the venue or point of purchase.

The Black Keys bring their "Let's Rock" Summer Tour to Dos Equis Pavilion in Dallas on Friday, July 17, 2020! Tickets go on sale to the general public on Friday, February 28 at 10am. Gary Clark Jr. and Marcus King Band will also perform. This event will take place rain or shine.

DALLAS, TX – February 24th, 2020 - The Black Keys confirm their 35-date “Let’s Rock” summer tour with performances in cities including Seattle, Dallas, Boston, New York, Tampa & Jacksonville (full dates below). Produced by Live Nation, each date on the tour will feature special guest Gary Clark Jr., with the exception of the July 10th Berkeley show which will feature support from Allah-Las. Jessy Wilson, The Marcus King Band, and Yola will each open select dates. Tickets for all dates will go on sale to the general public beginning Friday, February 28th at 10am local time here. Citi is the official presale credit card of the “Let’s Rock” 2020 Summer Tour. As such, Citi cardmembers will have access to purchase presale tickets beginning Tuesday, February 25 at 10am local time until Thursday, February 27 at 10pm local time through Citi Entertainment®. For complete presale details visit www.citientertainment.com.

The Black Keys’ ninth studio album, “Let’s Rock,” was released on June 28 via Easy Eye Sound/Nonesuch Records. Auerbach says, “When we’re together we are The Black Keys, that’s where that real magic is, and always has been since we were sixteen.” “Let’s Rock” has received critical praise, with Paste saying, “If you want something you can crank up at backyard barbecues or in the car with the windows down, well, The Black Keys have two words for you, and they’re in the album title.” and The Wall Street Journal adds, “The Black Keys have mastered the form of guitar-based music, and the craft at work on these dozen songs is something to behold.” The band also is featured in The New York Times Sunday’s New York Times Arts & Leisure section and were profiled on CBS This Morning, which can be seen here.  “Let’s Rock” is available on all formats here.