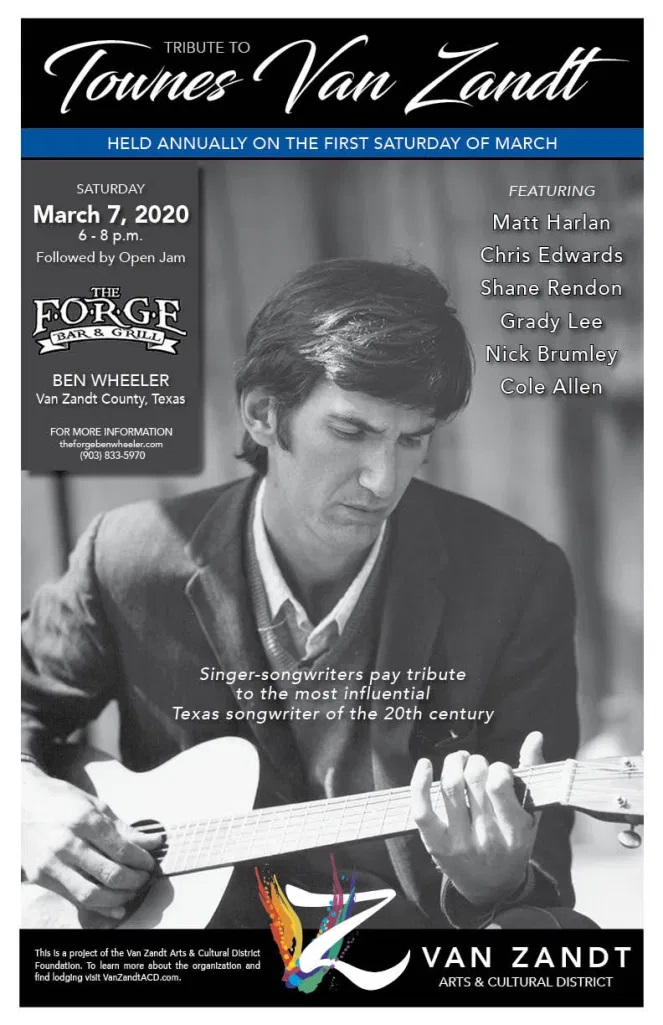 The late Townes Van Zandt is often referred to as the most influential Texas songwriter of the 20th century. Musician Steve Earle says he was “the best songwriter in the world.”

Performers imbedded in Townes Van Zandt music honor the legend in song swap style during the Tribute event. They include Matt Harlan, Chris Edwards, Shane Rendon, Grady Lee, Nick Brumley, and Cole Allen. Other musicians are invited to bring instruments and continue the tribute in an open jam session after the show.

Last year, in celebration of the 75th anniversary of Van Zandt’s birthday March 7, his family’s record company, TVZ Records, along with Fat Possum Records, released a new album, Sky Blue, a collection of unreleased songs created 47 years ago. Newly released this year are other records including a double LP compilation, The Best of Townes Van Zandt; reworked artwork and lyric sheet and remastered 180 gram vinyl, Townes Van Zandt/50th Anniversary Edition; and Our Mother The Mountain/50th Anniversary Edition. A limited supply of vinyls and CDs are available at the Tribute with proceeds benefiting the arts foundation and a larger variety are available online at www.townesvanzandt.com.

Townes Van Zandt was a poet and songwriter beloved by his many fans and peers. Don Williams and Emmylou Harris had hits with his song “If I Needed You.” Willie Nelson and Merle Haggard reached No. 1 with their version of his song “Pancho and Lefty.”

For more information on the Tribute to Townes Van Zandt March 7 at The Forge Bar & Grill go to theforgebenwheeler.com or call (903) 833-5970.