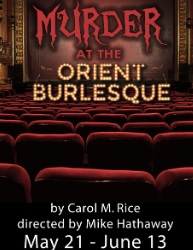 Murder at the Orient Burlesque

When Russian princess Katherina Anastasia Faberge Antoinette joins the cast of the burlesque at Christie’s Orient Palace, the trouble begins, so it’s not a surprise when she turns up dead after only one performance. As Detective Red Flannegan quickly discovers, everyone has a motive, and the Czarina was not only shot, but poisoned, stabbed, electrocuted and strangled. The question then becomes not who did it, but who did what, and is there anyone who didn’t? A riotous comedy by Rover’s Artistic Director and the author of last season’s hit, Sharing the Stage is Murder.