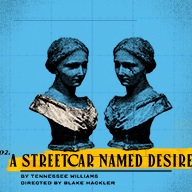 Blanche Dubois suddenly arrives in the French Quarter of New Orleans to visit her sister, Stella, but she appears to be running from something. The power struggle that unfolds between Blanche and her brother-in-law, Stanley, threatens to reveal dark secrets in her past and shatter the illusions she’s created around her life. Directed by STT Artistic Associate Blake Hackler, and widely considered to be among the top tier of great American plays, A Streetcar Named Desire maintains its poignancy seventy years after its groundbreaking premiere.