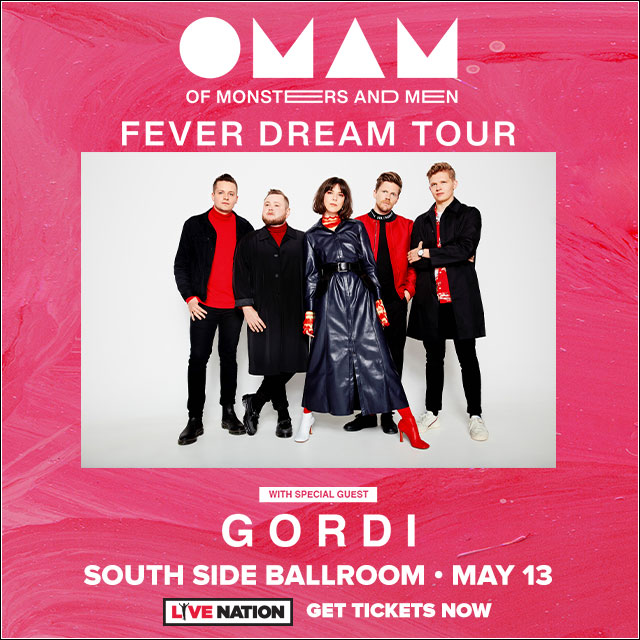 POSTPONED: Of Monsters and Men

*This event has been postponed. A new date will announced at a later date. If you have questions about your tickets, contact the venue or point of purchase.

Of Monsters and Men head to South Side Ballroom on Wednesday, May 13, 2020 in Dallas.

Dallas, TX (January 21, 2020) – Igniting the new year with a bang, Of Monsters and Men return to the States for the FEVER DREAM TOUR across North America this Spring.

The run kicks off April 29 in Raleigh, NC at Red Hat Amphitheater, rolls through major markets including New Orleans Jazz & Heritage Festival on May 1st, ACL Live at The Moody Theater in Austin on May 14th, Hollywood Forever Cemetery on May 22nd in Los Angeles, and concludes at Governors Ball in New York the weekend of June 6th-7th. Gordi will be joining the band as support on the headline shows.   Check out the full itinerary below and at www.ofmonstersandmen.com.

The band will launch a special presale on its official site Wednesday, January 22 at 10am local time. A Spotify presale follows Wednesday January 22 at noon local time. General on-sale begins on Friday January 24 at 10am local time. Renowned for unforgettable performances, Of Monsters and Men will once again deliver an unforgettable sensory experience featuring longtime fan favorite anthems as well as new music from their critically acclaimed new album FEVER DREAM which debuted #1 on Billboard’s Rock Album Chart. Of Monsters and Men recently stopped by Triple J’s “Like A Version” where they covered Post Malone’s “Circles” and performed their latest single “Alligator.”

The cover instantly became a fan favorite and has already been viewed over 200,000 times online. OF MONSTERS AND MEN went from the talk of Iceland to the top of the global conversation on their 2011 debut, My Head Is An Animal. Not only did the record go platinum, but it also produced an international smash in the form of “Little Talks.”

The breakthrough single earned a quintuple-platinum certification from the RIAA, made history as “the first song by an Icelandic band to cross 1 billion streams on Spotify,” and landed the band a performance on Saturday Night Live. The group appeared on official soundtracks for franchises such as The Hunger Games, The Walking Dead, and Beat Bugs, to name a few. In addition to performing at festivals such as Coachella, Lollapalooza, Firefly, and beyond, they supported Florence + the Machine on a high-profile arena tour. In the midst of this rapid rise, 2015’s Beneath The Skin bowed in the Top 3 of the Billboard Top 200 and the band made a cameo in an episode of HBO’s Game of Thrones in the same year. In 2019, their third album FEVER DREAM debuted #1 on Billboard’s Rock Album Chart.