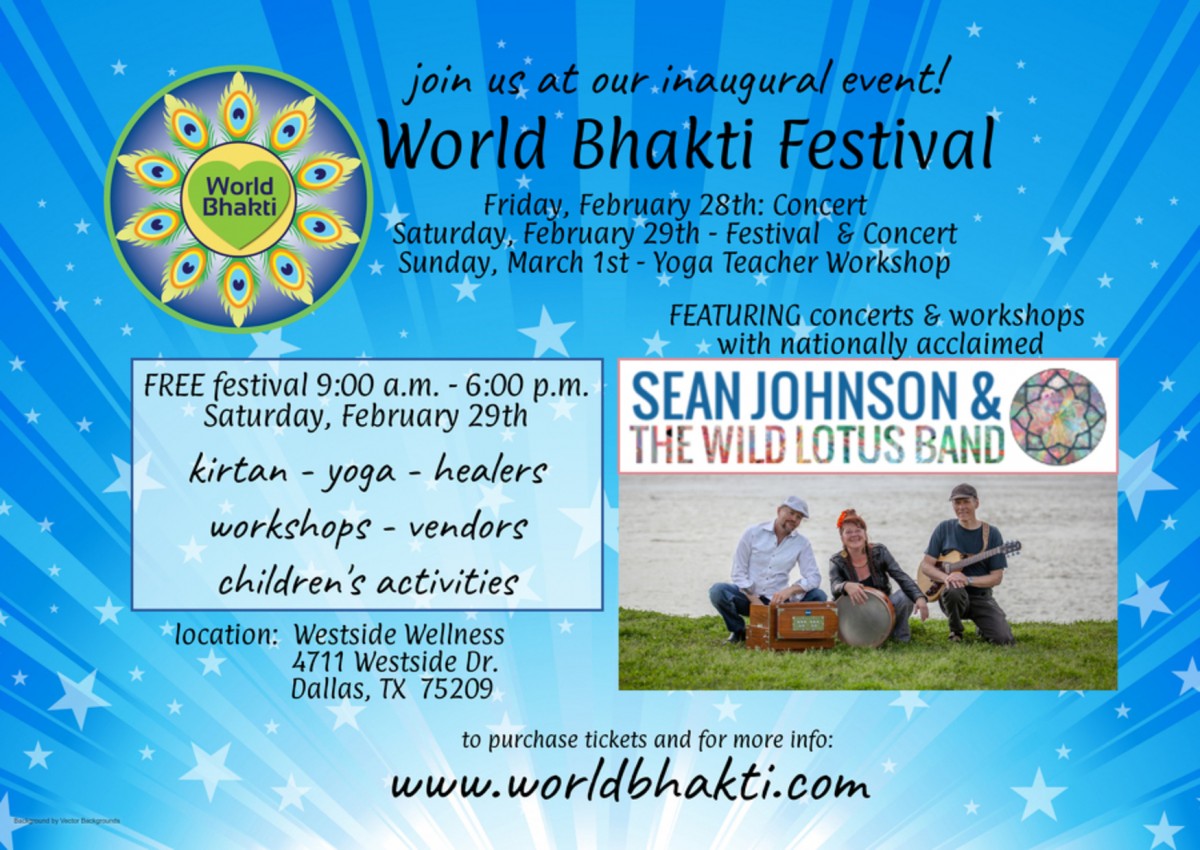 The Dallas yoga community is preparing for something special this leap year weekend. The first World Bhakti Festival takes place Feb. 28, 29 and March 1 at Westside Wellness. The festival includes a free admission fair on Saturday with local vendors, healers and plant-based food and drinks, as well as a variety of free traditional yoga and meditation classes, and education workshops. However, the main focus of the festival, as the name implies, is Bhakti: the yoga of devotion.

This is the first yoga festival of its kind in Texas. What’s more, it’s open to people of all ages, all abilities, all religions, and all socio-economic levels. So, it’s a good opportunity for a road trip, regardless of your connection to Bhakti Yoga. Especially given the diverse offerings, affordability, and comfortable venue.

Since the festival is centered around devotion, it’s appropriate that the venue is within the oldest continual congregation in Dallas.  Westside Wellness is actually a holistic healing center nestled within the Central Christian Church (Disciples of Christ) complex. The six-acre campus includes a zen garden, a one-acre wifi-equipped dog park with its own lending library, a community vegetable garden, and a soccer field. Additionally, this is a popular wedding venue with a neo-classical sanctuary with a pipe organ, and a separate chapel or “little church.”

According to one of the three World Bhakti co-founders, Lavanga Latika Devi Dasi, “Bhakti is inherent in traditions all over the world.  It’s actually the string that holds them (religious traditions) altogether.  The heart of Bhakti is learning to see how we are actually more alike than different.  When we sing in Kirtan (musical expression of Bhakti), there is no us and them. By awakening our relationship to the Divine, we can then see how we are all children coming from the same source.”

Bhakti has been gaining steam across the U.S. along with the rise in the spiritual but not religious population. Bhakti festivals are popping up across the U.S., in part fueled by people’s love for music. At the Bhakti festivals, devotion is primarily expressed through the form of Kirtan music. Basically, chanting of the holy name, prayers and mantras, swaying and even ecstatic dancing to the beat of the drums — or electric guitar.

Bhakti resonates with everyone, as music is a universal language, and expression. As a result, music will be an important component of the leap year weekend activities at World Bhakti Festival.

Visitors can attend the entire weekend. Or, register for specific days or events. A portion of World Bhakti festival proceeds benefits a non-profit that helps women navigate the emotional, mental, physical, legal, and technical obstacles after the loss of a spouse.