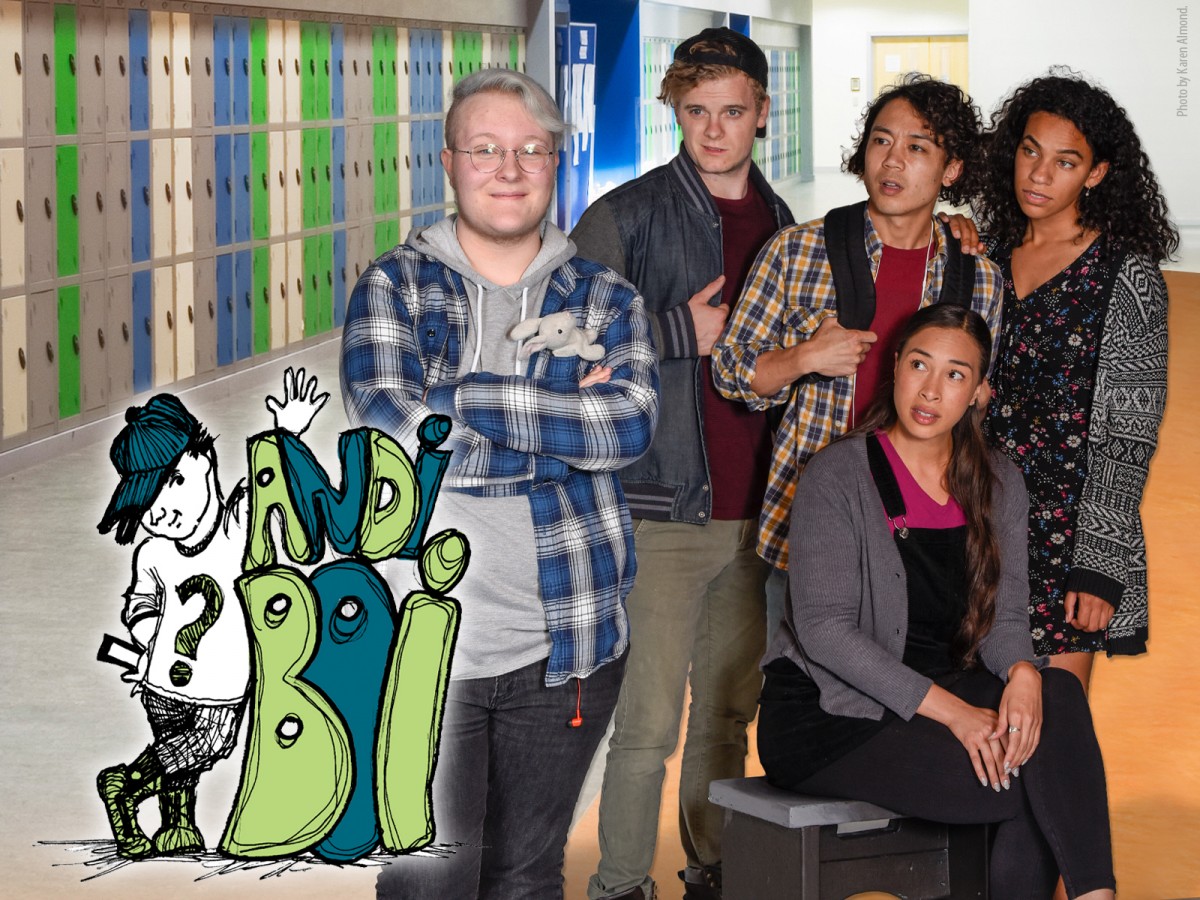 Co-produced with Booker T. Washington High School for the Performing and Visual Arts

in partnership with First Unitarian Church of Dallas

First Unitarian Church of Dallas, Texas Instruments, Capital One and PwC are part of the collaboration which has national lead funding support from the Theater Communications Group and the Doris Duke Charitable Foundation

Curiosity leads children to investigate and explore the world around them, to figure out relationships, and ultimately discover who they are. As more and more young people come to terms with their gender identity and transitioning, there is a need for resources that encourage conversation and understanding in a safe and open environment. With the world premiere of ANDI BOI, Dallas Children’s Theater (DCT) adds this topic to its series of internationally recognized teen issue plays. ANDI BOI will run at DCT from    February 7 – February 16, 2020.

Andi is a transgender teen entering his first day of school identifying as a male. Former classmates recall his last name when they hear it, but there is something different about Andi that keeps the dots from connecting clearly in their minds.  Soon his new teachers, classmates, and his classmates’ parents will figure it out. How will they react? With aggression? With compassion? With confusion? Inspired by one teen’s journey, ANDI BOI is told with a sensitivity towards Andi and uses wit, heart, and warmth to help audiences find their way to greater compassion and awareness. Post-show conversations with subject matter resources will follow every performance.

“DCT has made it a priority to present stories about teens caught in difficult situations and the tough barriers they face, in part, because so little energy is focused on teens. This means a wall of confusion and rejection often meets them,” said Robyn Flatt, Founder and Executive Artistic Director of DCT. “By increasing our awareness and understanding of these young people as human beings, as vulnerable young people among us, we can provide a supportive space during their search to find true identity, and as a result, we hopefully make the journey less painful.”

A recent report from the CDC* reveals that two percent of high school students in the United States identify as transgender. Yet, it is clear that the experiences of each child are distinct and run the gamut from very difficult and life-threatening to that akin to any teen going through a challenge.  As such, the producing team wants to be clear that this play is far from an attempt to suggest every child’s journey is the same.  ANDI BOI is one story about one life that is largely devised by a playwright.  It is not intended to represent an entire community, but rather be a starting point for conversation.

DCT commissioned local playwright, Bruce Coleman, to write ANDI BOI. His first decision was to speak with some of the two percent of high school students who identify as transgender. For Coleman, this included talking to a teen who recently transitioned and his parents. Using these conversations and research as inspiration, Coleman said he deliberately decided to use honesty and humor as tools for telling this story in hopes that it would have the broadest possible appeal. Coleman hoped to create an atmosphere of good will and understanding that will help audiences begin an important conversation around this topic. “I hope as our audiences get to know Andi, they’ll also get to know something about themselves,” Coleman said.

“As a gay man, I too kept a secret from my family until it became impossible to deny who I was anymore.” Coleman continued, “I feared rejection from family and friends as they discovered who I am, but I ultimately took that rejection and turned it into strength. I have been pushed at by a society that wants to squeeze me into a box and force me to be a thing that goes against everything that makes me this person I am. But when all has been said and done and because of a strong belief in myself, I can finally achieve my heart’s desire: To be seen, to be respected, and to be treasured. It’s all Andi and I are asking for.”

DCT is co-producing ANDI BOI with Booker T. Washington High School for the Performing and Visual Arts and in partnership with First Unitarian Church of Dallas. Additional support for the production comes from collaborating partners and sponsors Texas Instruments, PricewaterhouseCoopers (PwC), and Capital One.

Karon Cogdill, Theater Cluster Coordinator at Booker T. Washington High School for the Performing and Visual Arts (BTWHSPVA), said the entire administration and theater conservatory are proud partners in this project. “BTWHSPVA was created as part of the desegregation plan for the Dallas Independent School District; so an understanding of the need for diversity in our school and in the world is part of our DNA. We believe that all students must be recognized and honored for who they are. For us, education is the strongest way to show others the power that diversity has in all the arts and in our lives,” she said.

Andy Smith, Executive Director of the Texas Instruments Foundation shared his thoughts on the company’s involvement in this project, “Theater is a powerful vehicle that helps bring different experiences to light. We are proud to support DCT’s efforts to further the dialogue and share experiences around the topic of teens and young transgender people.” Smith said the company works every day to build an inclusive environment where people can be who they are, and have open discussions that help them understand other perspectives.

Todd Ranta, PwC Partner and DCT Board President, said inclusion is part of doing business. He said, “We believe it is vital to collaborate to bring new audiences to participate in this groundbreaking play exploring the transition of a transgender boy. I believe this play touches on universal elements of diversity and inclusion that can impact anyone when dealing with an unfamiliar situation.”

Stephanie Jeffery, Vice President of Diversity and Inclusion at Capital One Financial Services, echoes the sentiments of her corporate peers. "Many teens may either be going through their own transgender journeys or may have friends, family, acquaintances or schoolmates who are. This is also a topic which is increasingly being talked about in news channels. Creating dialogue around the transgender experience is an incredibly important purpose, and the empathy that can be created through the medium of theater will create meaningful opportunities for further discussion, tolerance, and ultimately, inclusion of transgender people."

First Unitarian Church of Dallas has been a voice of progressive religion in Dallas since 1899, working toward a more just and compassionate world. For over forty years, they have been on the forefront of LGBTQ initiatives.

Rev. Dr. Daniel C. Kanter, Pastor of First Unitarian Church of Dallas, is proud to be a partner in this project.  He said, "As a progressive church, we know that everyone has dignity and worth no matter who they are.  First Unitarian has been an open and affirming church for over 45 years and, in the last five years, has seen an increase in our parishioners who are navigating transgender issues.  We know how little most people even know about being transgender and believe that supporting this effort is not only good for our church, but also for our society." As a producing partner, First Unitarian Church of Dallas will lead a community action event scheduled for March/April 2020.

Over the past 15 years, DCT has offered several teen issue plays that examine topics including bullying, learning differences, teen brain development, eating disorders, and dating violence. Subject matter resources lead a discussion after each of these types of performances. At the performances, teens and parents are provided information and perspective on the topic, as well as guidance on how to navigate the inherent trauma imbedded in these situations.

Theatre Communications Group (TCG) – the national service organization for American theater – awarded DCT and its partners a major grant to support the production and the events surrounding ANDI BOI as part of its second round of Audience (R)Evolution Cohort Grants. Funded by the Doris Duke Charitable Foundation, the program gives awards to theater organizations to implement and refine ways to increase audience engagement and community development with a focus on young audiences. The grant will support the project’s goal of building a community to support teens and their parents and encouraging conversation and understanding of transgender youth in a safe and open environment.

“I believe theater provides a powerful tool during our children’s transition to adulthood by spotlighting some of the serious challenges they and their peers encounter along the way,” Flatt said. “It is up to us to help all our children, irrespective of color, creed, or gender orientation, to have a safe space for physical growth, an environment for creative discovery, and an open door for tolerance and acceptance.”