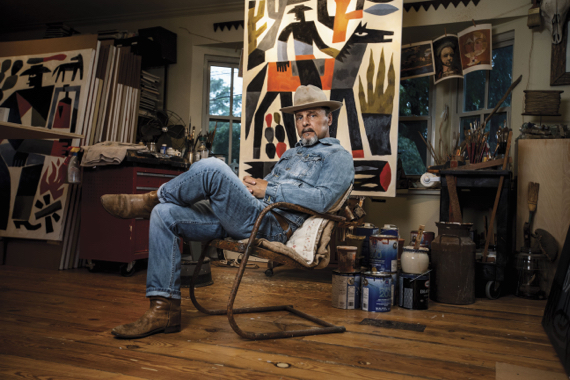 Jon Flaming was born on December 2, 1962, in Wichita, Kansas. His family moved to Texas in 1968. Visits to his grandparent’s Kansas ranch as a boy made a strong impression. It was here that Jon first experienced small-town America and the rural countryside and began to capture its unique character and beauty with his camera and sketchbook. “My earliest memories are of rural, middle America,” says Flaming, referencing his grandparents’ Kansas cattle ranch and his many visits there. “It was such a sweet time for me; I have great memories of seeing a working ranch, the farm equipment, the cattle, and the images of a small-town farming community and everything that goes along with that. So when I could drive, I wanted to get out see everything in Texas that was related to what my memories were as a kid. All of it appeals to me.” (Interesting side note, Jon’s birthplace may have been Kansas, but his Texas connection is evidenced by the fact that his distant midwestern relative U.S. Senator Charles B. Farwell was responsible for financing the construction of the Texas State Capital in the late 1800s. He also owned the 3,000,000 acre XIT ranch in the Texas Panhandle with his brother John V. Farwell.)

In 1985 Jon graduated from Texas State University with a bachelor’s degree in design and for the last 30 years has been creating award-winning images and branding campaigns for many clients including Neiman Marcus, Pizza Hut, The John Wayne Cancer Foundation, The John Wayne Film Festival, Forbes, JCPenney, FedEx, Milton Bradley and Pepsi. His work has been recognized and published by numerous organizations including Communication Arts, Print Magazine, Graphis, and The Society of Illustrators. Just recently, the John Wayne family asked Jon to partner with them on promoting the John Wayne Brand.

Jon’s fine art is in the permanent collection of the Tyler Museum of Art, The Grace Museum in Abilene and also the San Angelo Museum of Fine Art. His work is also in many private & public collections and has been exhibited in numerous solo and group shows.