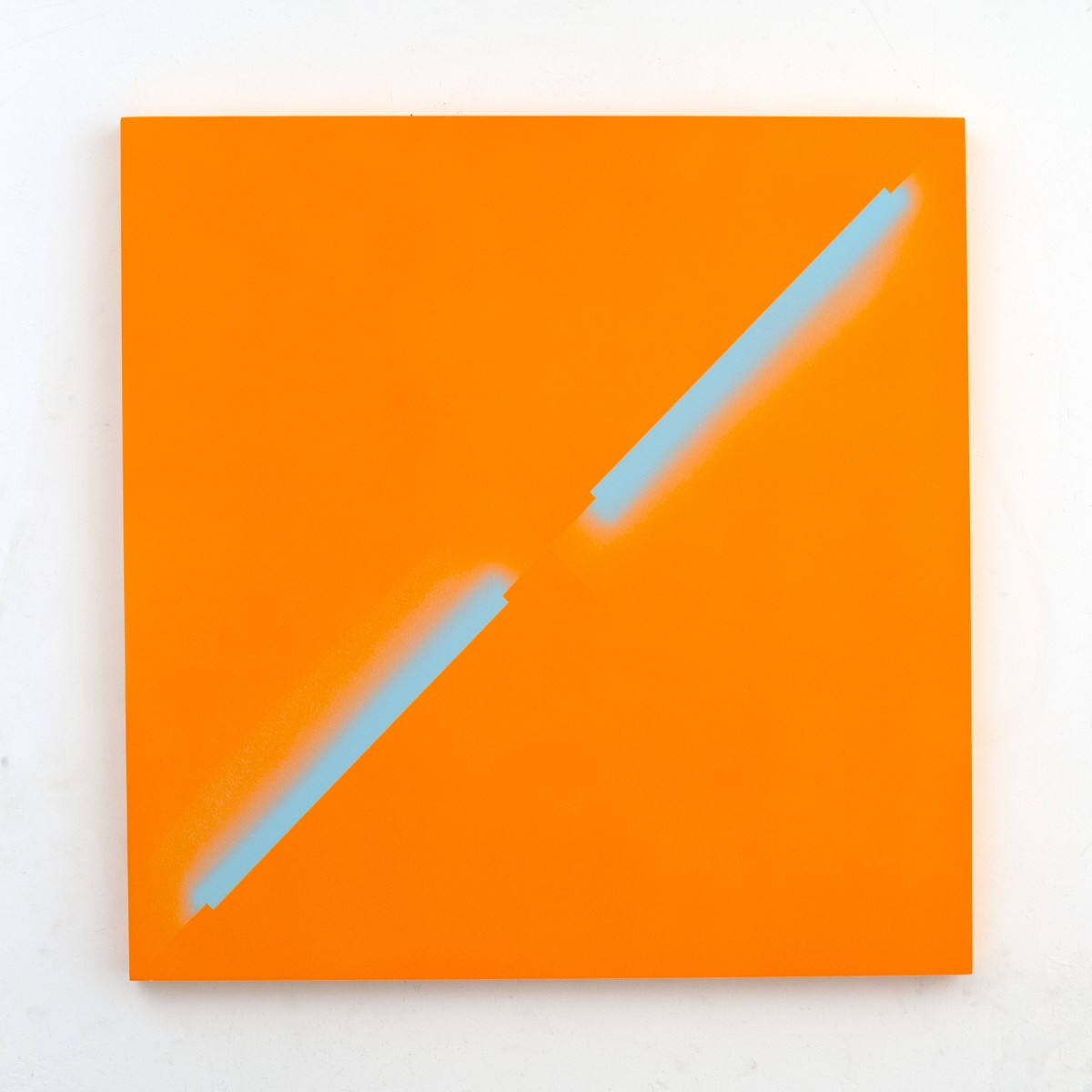 Returning for his fourth solo exhibition with the gallery, Loring Taoka (Fayetteville, AR) presents a new series of 13 paintings in Oh Well. This exhibition reflects a current shift in Taoka’s studio practice from his well-known paintings on plexiglass

to new explorations on panel. Taoka utilizes this updated surface to advance his concerns with ideas of perception, a process that requires developing alternative approaches to communicating the illusion of flat and dimensional space. Significant roles are played by geometric shapes and color choices, altogether creating an experience that requires viewers to question what they are seeing.

Works on plexiglass have been the focus of Taoka’s previous exhibitions at Galleri Urbane. In these former paintings the artist subtly eschews the work’s surface; the clear material nearly disappears and allows one to focus on the painted geometric shapes. Conversely, the work in Oh Well fully embraces the physical presence of each painting’s surface. A new visual language has thus been developed: wherein the paintings on plexiglass create playful dimension through resulting shadows, the creation of space in the paintings

on panel fully relies on the controlled application of paint. Taoka forges a depth of field in moments where a blurred gradient meets a hard line. Geometric shapes seemingly slip in and out of focus and appear to occupy multiple layers of foreground, middle ground, and background. These works willingly draw attention to the surface of the painting while expanding into the picture plane.

The simple geometries in these paintings serve as the perfect model for what Taoka sets out to achieve. A straightforward example lies in (untitled - blurry rectangle #2) (2019). A crisp red rectangle extends into a blurred version of itself at its midpoint, ultimately still reading as a singular rectangle. By providing just enough information, Taoka seeks to challenge the audience in how we determine or classify what we see. Color plays an equally important role in challenging the viewer. Some of the color combinations become difficult

to look at but serve as invitations for viewers to become more wholly involved in what they’re looking at. An electric combination of orange and blue in (untitled - two blurry rectangles) (2019) animates the painting’s surface, requiring dedicated inspection to unpack the work’s full impact.

Through these carefully crafted geometries and bold color choices, Taoka creates some of his most dynamic paintings to date. He is able to distill his ideas and interests in acts of perception through adopting new methods and materials. The resulting body of work is one that remains true to his previous investigations while introducing a new chapter in the artist’s practice.