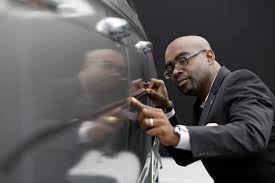 Earl Lucas, a Chief Designer for Lincoln Motor Company is responsible for the recently designed Nautilus Concept.  His resume includes the luxurious 2016 Navigator, the expressive 2013 and 2010 Ford Taurus in which Lucas led the exterior redesign of Ford’s flagship sedan and redefining the Taurus with a new sculpted, stylish and more powerful model.  Prior to this, Lucas played a key role as the Interior Design Manager on the award-winning 2009 Ford Flex.  He has also worked on numerous programs ranging from the 2003 Ford F-150, the 2007 Ford Edge and the Lincoln MKX.

Lucas began his career at Ford Motor Company in May of 1999 as the Senior Designer of the Ford Expedition and later on the Lincoln Navigator.  Prior to joining the Ford, Lucas worked for Reese Design, a firm that developed plane interior designs for the Sultan of Brunei in Austin, TX.  Lucas holds a Bachelor of Fine Arts Degree from the College of Creative Studies in Detroit, MI. with a concentration in Transportation Design.

Earl Lucas is a native of Dallas, TX and a graduate of the internationally known Arts Magnet at Booker T. Washington High School Class of 1988.