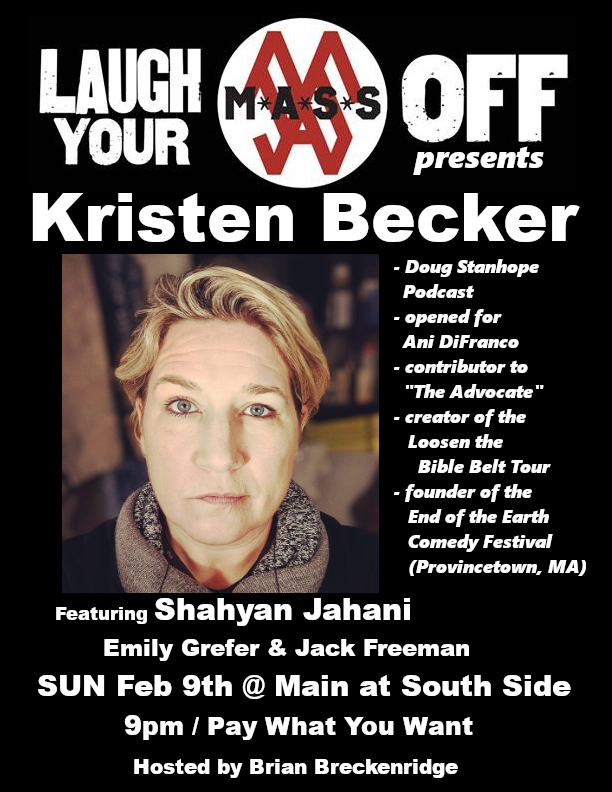 Onstage and off, performer/producer/activist Kristen Becker’s role is that of instigator. She isn’t afraid of figuring things out on the fly, nor does she shy from developing projects for equally capable hands. As Becker puts it, “I’m pretty good at putting things together, getting them going, and then getting out of the way.”

Raised in conservative Shreveport, Louisiana, the Dykes of Hazard creator has opened for Ani DiFranco, contributed to The Advocate, and – between founding Nietzsche’s legendary Doin’ Time Comedy open mic and serving as first general manager of Helium Comedy Club – been featured on the cover of Buffalo News’ entertainment section as “Buffalo’s Queen of Comedy.”

As decidedly adult debut album How Could She? attests, Becker’s stand-up topics range from sex to humanitarianism. With Pastor Jay Bakker (son of one Tammy Faye), in 2015 Becker embarked on an ideological exploration of the Deep South. Their Loosen the Bible Belt variety tour emphasized humanity over hypocrisy, offering unifying voices to bridge the gap between religious groups and LGBTQ communities. With a Loosen the Bible Belt documentary short on the horizon, Becker is excited to highlight an underground, self-produced circuit of freelance pastors preaching love and acceptance, notions that remain foreign to more sanctimonious pulpits.

The Bible Belt also loosened Becker’s organizational intuition. 2016 saw her founding the Summer of Sass, a nonprofit collective freeing young LGBTQ adults from damaging religious climates to live, work, and personally thrive in the liberal haven of Provincetown, Massachusetts. Vice called the experiment “the kind of formative experience that can change—or save—lives.” The Boston Globe agreed, lauding the environment as one where “gender is not an issue, where the specter of being bullied is not a daily fear.”

Between community sales of the artist-driven Resistance Coloring Book and a $25,000 grant from the Palette Fund, the mentorship program has doubled its number of participants, began assembling a board of directors, and sought permanent housing. As Becker sees it, telling kids “It gets better,” is a great start. But the ability to show them how much better things can be is another altogether. “It’s mind-blowing how quickly the impact begin to happen,” Becker marvels, “and these kids’ lives begin changing forever.”

2019 projects include filming a TedX talk and finalizing sponsors for October 10-12’s inaugural End of the Earth Comedy Festival. (“The theme is everything’s going to shit. Let’s laugh about it, but also how can we also make it better?”) Becker will also revisit her annual holiday character Sandy Claus, the “older, drunker, gayer” sister of St. Nick who offers audiences live seasonal fare somewhere on the spectrum between drag acts and The SantaLand Diaries.

The middle ground is where Becker feels most at home…and most useful. Her background, life experiences, and insight into seemingly disparate societies allow her to act as an open-minded translator. If she can identify as a bleeding-heart liberal as readily as she concedes a Right-leaning stance on firearms, then the Women’s Studies majors and rednecks of the world can also find common ground, for the good of the world. If she can help them share a few laughs in the process, even better.

“If I didn’t do it, no one else was going to,” Becker laughs. “Turns out I’m the lesbian for that job, too!”

Show at 9pm. No cover.
Cash donations encouraged at the end of the show.