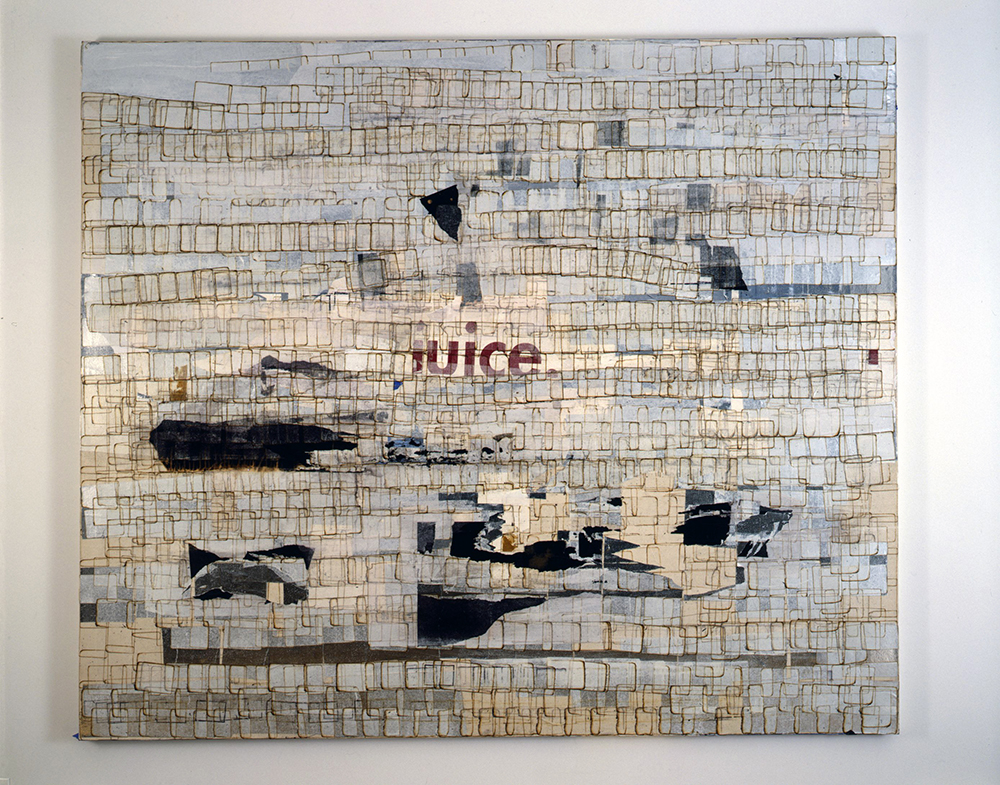 The Modern Art Museum of Fort Worth presents the exhibition Mark Bradford: End Papers. Curated by Michael Auping, former Chief Curator at the Modern, this exhibition focuses upon the key material and fundamental motif the artist employed early in his career and has returned to periodically over the past two decades.

The pivotal works in this exhibition are primarily constructed from end papers, which Bradford learned to use as a hairdresser in his mother’s beauty salon in South Los Angeles. These small sheets of translucent paper protect hair from overheating in the process of using curlers to create permanent waves. Part painting and part collage, the colored End Paper works feature grids that contain various hues that pulsate across the surface. Bradford said recently, “I learned my own way of constructing paintings through the End Papers—how to create space, how to use color. And how to provide a new kind of content. They were the beginning for me.”

Bradford’s End Paper works not only allowed him to make beautiful abstract paintings but inspired the artist’s use of “social papers” that related to his biography and his neighborhood. From the End Papers, Bradford began using merchant’s posters, broadsides, and even billboards he found in downtown Los Angeles to make his paintings.

Auping comments, “The End Paper works are not only beautiful, they were prophetic in terms of layering abstraction with personal and social content. Much of the history of post–World War II art is about engaging common materials. This is a unique instance of that. The End Papers are a key element of Bradford’s identity. Just as a broad range of minimalists are inextricably linked to their signature materials, from Dan Flavin’s use of fluorescent tubes to Ruth Asawa’s weaving of galvanized wire, Bradford has adapted the materials and processes of the hairdressing profession to be both medium and message in his art.”

The exhibition will include approximately 35 major End Paper works drawn from private and public collections and new work created by the artist for this presentation.

Mark Bradford was born in 1961 in Los Angeles, where he continues to live and work. He earned a BFA in 1995 and an MFA in 1997 from the California Institute of the Arts. Bradford’s work has been widely exhibited internationally, and the artist is the recipient of numerous awards, including the US Department of State’s Medal of Arts in 2014, his appointment as a National Academician in 2013, and a MacArthur Fellowship Award in 2009. His work is in numerous public collections, including The Metropolitan Museum of Art, New York; The Museum of Contemporary Art Chicago; The Museum of Fine Arts, Boston; The Museum of Modern Art, New York; San Francisco Museum of Modern Art; Solomon R. Guggenheim Museum, New York; Walker Art Center, Minneapolis; Whitney Museum of American Art, New York; and Hammer Museum, Los Angeles. In 2017, Bradford represented the United States at the 57th Venice Biennale with Tomorrow Is Another Day, and in November of that same year, he unveiled Pickett’s Charge, a monumental, site-specific installation for the Hirshhorn Museum and Sculpture Garden in Washington, DC. In 2018, Bradford was commissioned to create a site-specific work for the new US Embassy in London. Entitled We The People, the work is comprised of 32 panels, each 10 square feet, featuring selected text from the US Constitution. Bradford’s current exhibition, Los Angeles, is on view at the Long Museum in Shanghai until October 13, 2019.