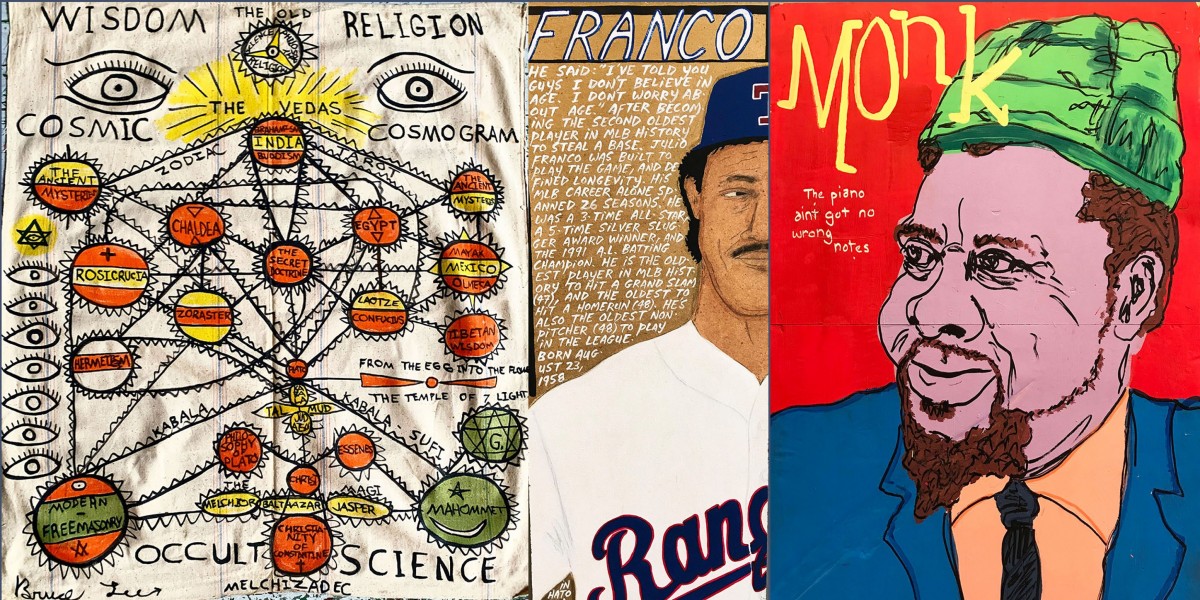 Jan 12 - Feb 9, 2020 - There will be a weekly rotating exhibit with some new pieces to the gallery and some powerful supreme pieces from our collection inventory, along with remaining Folk Art Collection of John Mitchell from Eureka Springs AR

JAN 12, Sunday 6-9 p.m. We open an exhibit at the KESSLER THEATRE - Davis St. in Oak Cliff, Dallas
WELCOME - New work of Will Johnson, Tim Kerr, & Bruce Lee Webb. Artists will be at the opening along with music by DJ Concord Kill

Will Johnson was born in Missouri and was a baseball fan from the start. He loves the lore and history of the game and the tales of the players.
Reading, studying, and keeping up with the baseball season is all part of his home life and travel on the road as a touring musician.
He is well known for his music career flying solo or part of Centro-matic, South San Gabriel, Monsters of Folk, Baboon, and many others.
Will’s painting style is primarily vertical profiles of various baseball players with a sliced view of them and obscure facts about their baseball career. In addition to the paintings about players, Will throws in other horizontal paintings of various ball fields with details on events of the field.

Tim Kerr was born on the coast of SE Texas and in his youth became involved in the DIY music scene playing in Punk rock bands such as the Big Boys, Poison 13, Bad Mutha Goose and many others. He is known far and wide for his music accomplishments in bands and music producing. Some of his earliest art pieces still reside on album covers and flyers from his band years. Although he still works with varying musicians, he prefers to study and play Irish music.

He earned a degree in painting and photography at the University of Texas in Austin and studied with photographer, Garry Winogrand.
He is known far and wide for his paintings and mural work.  His subjects tend to be the obscure masters in their fields, from musicians, artists, civil rights workers, to sports and literary figures.  He paints beautiful minimal portraits with a quote or a rare tidbit about the person.

Bruce Lee is the co-conspirator of Webb Gallery in Waxahachie.  He loves hobo lore and train car graffiti.  He is a researcher and collector by nature and co-authored the book As Above So Below -Art of the Fraternal Lodge with Lynne Adele and published by the University of Texas Press. In his youth he was surrounded by his missionary Grandparent’s esoteric books and folk art which they brought back to the U.S. These mysterious treasures were Bruce's earliest inspirations.
Bruce Lee grew up in Dallas, where in the 1980s he discovered the skateboarding and punk rock scenes. It was here that he met his wife, Julie and they quickly began a lifetime of collecting together.
The artists Bruce Lee has encountered along the way have had a profound influence on his own artwork.
Bruce Lee works every day with his artwork serving as a journal as he visits interests and researches people, places, lore, spirituality, music, and other never-ending subjects from his immense book collection.