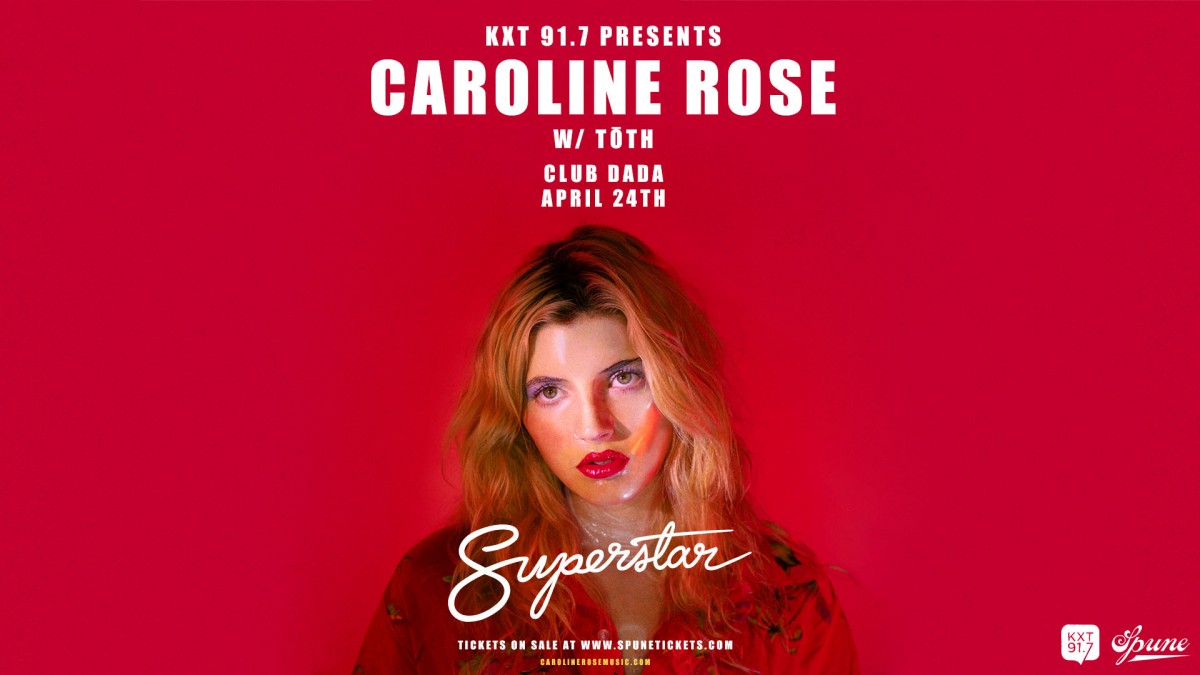 **This show is postponed. A new date will be announced at a later time. For questions or ticket inquiries, please contact the venue.

Caroline Rose and  Tōth head to Club Dada in Deep Ellum on Thursday, April 24, presented by KXT. Doors open at 7pm, show starts at 8pm. This event is for all ages. Tickets go on sale to the public on Friday, January 10 at 10am CT.

Caroline Rose announces Superstar, out March 6th on New West Records, lead single/video “Feel The Way I Want,” and a North American tour. The follow up to 2018’s acclaimed LONER, Superstar is a bigger, badder, glitter-filled cinematic pop record. It’s an underdog story, and one not far off from Rose’s real life. After years of struggle to release what would ultimately become LONER, Rose found herself in the midst of a new widespread audience, one both intrigued and perplexed about how and where to place her. This feeling of otherness, combined with a developed set of studio skills and a challenge to “make something from nothing,” marked the beginning of Superstar—the story of a shamelessly odd hero, or rather anti-hero, on a quest to become a someone.

Inspired by cult classics such as The Bitter Tears of Petra Von Kant, Mulholland Drive and the mockumentary Drop Dead Gorgeous, Superstar plays out like a film. After the protagonist receives a mistaken phone call from the glamorous Chateau Marmont hotel in album opener “Nothing’s Impossible,” they (gender neutral pronoun) take it as a sign toward a star-studded future and leave behind everything in pursuit of a newly established destiny. What ensues is a cinematic paradox that in one moment finds them strutting down a neon strip in full Saturday Night Fever hip-swing, and the next sipping a dirty martini at the rundown apartment complex pool dwelling on life’s unfortunate turns. It’s a narrative Rose pulled directly from the somewhat shameless desires of her own growing ambition, as well as the public breakdowns of several notable celebrities. “To me, there’s both humor and horror in hubris and what it takes in order to be successful. I wanted to make a story out of those parts of myself that I find largely undesirable and embarrassing, then inject them with steroids.”

Created with equal parts satire and self-reflection, Superstar’s anti-hero personifies the type of aspiration and boisterous confidence we as casual on-lookers are wont to dismiss or denigrate, yet at the same time applaud. Lead single “Feel The Way I Want” shamelessly pokes fun at this notion. “My goal is to have people, including myself, not know whether to love or hate this person. They’re kind of like a walking eye roll who’s easy to dismiss, but at the same time you admire their determination. It’s the Kanye effect.” The accompanying video, directed by Rose,  was made on an iPhone over the course of an 11-day road trip from Hollywood, California to Hollywood, Florida. It’s meant to show the more shallow side of self confidence.

Since LONER’s release Rose began formulating the ideas and songs for Superstar in between the band’s near-incessant touring schedule, from playing sold out headline shows across the country and beyond to becoming fan favorites at some of the world’s biggest festivals. She wrote, recorded and produced Superstar in her home studio, as well as on a portable rig set up in green rooms while on tour.

Superstar will be available across digital retailers, compact disc & and vinyl.  The album will also be the Vinyl Me, Please "Essential Record of the Month" for March and will be available on colored vinyl exclusively from VMP. Direct-to-Fan and Independent Retail editions will feature an exclusive, fold-out 24x36" poster autographed by Caroline Rose and is available for pre-order now via New West Records.