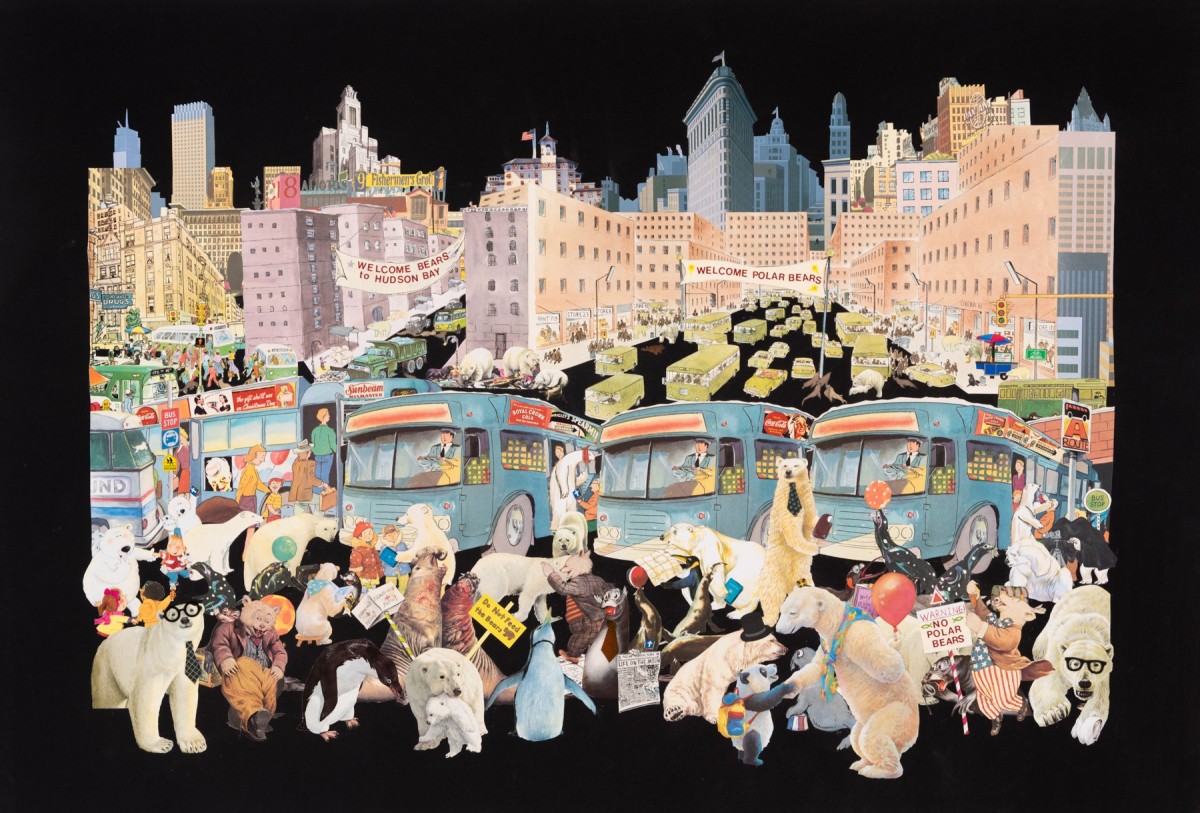 Satirical in nature, Greco’s collage work utilizes his comprehensive knowledge of art history themes, concepts, and compositional techniques while revealing his awareness of politics. Many of his collages use the Baroque technique of strong diagonals to create a dynamic composition.  And he considers Norman Rockwell’s later, more politically charged paintings as an influence on his compositional style and content.  Not one to shy away from the harshness of reality, Greco also turns to personal experience in his work.

As a former firefighter and paramedic, Greco experienced trauma and tragedy firsthand. Drawing on these experiences and his pursuit of political discourse, Greco’s work quickly becomes Social Intercourse. Whether the viewer likes it or not, he wants to start a conversation with them, even if it involves conflict. Utilizing illustrations from children’s books that hint at 1960s nostalgia and giving his work titles such as, Democracy Created the One Dimensional Clown, Greco’s collages become even more intriguing to contemplate.

Paul Greco is a retired Houston firefighter and paramedic who found art after his early retirement. He received his Bachelor of Fine Arts in Painting and Drawing from Stephen F. Austin University and his Master of Fine Arts in Printmaking from the University of North Texas.  In 2016, he ran a strong race for Texas House District 64 and was narrowly defeated by less than four percentage points.
Paul resides in Denton, Texas. Social Intercourse will be on view in Gallery 219 at Eastfield College from January 23 – February 21, 2020. On Thursday, January 23, from 12 – 1 pm, artist Paul Greco will discuss his work in the gallery followed by a reception.  All events are free and open to the public.

Gallery 219 is located at Eastfield College in room F219C on the second level of the F building on the west side of campus.  Gallery hours are Monday – Friday, 8:30 am – 5:00 pm. Parking is free.