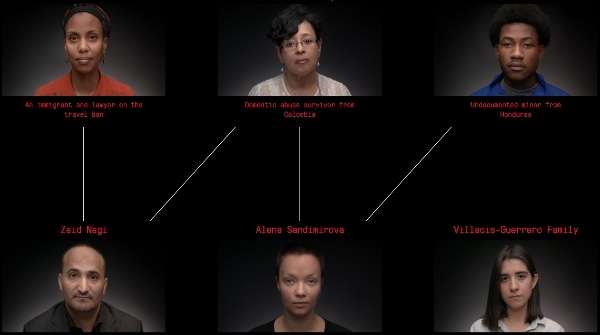 Free Film Screening: We Are Witnesses: Becoming An American

THE MARSHALL PROJECT
WE ARE WITNESSES: BECOMING AN AMERICAN

This screening is co-sponsored by the
Dallas Peace & Justice Center

This Tuesday Social Justice Film Festival screening will feature a series of short films created by
the Marshall Project. We Are Witnesses: Becoming an American tells immigrants' stories and the stories of those trying to help and hinder them.

From the filmmakers:
This series seeks to reclaim the narrative around immigration. By letting people tell their own harrowing, sad and inspiring stories, we are given entry into their worlds. We meet the Russian asylum seeker persecuted in their native country on account of sexual preference; the family torn apart after a father is deported to Ecuador after living in the U.S. for nearly two decades; a Honduran teen risking his life to flee across the Mexican border; and a Yemeni-American shopkeeper who organizes his community to protest the Muslim travel ban. We are taken inside the system by an immigration judge, an advocate and a Border Patrol agent. And we learn what it is like to live under fear of deportation and to experience the joy of being sworn in as a citizen. Together, these stories help us understand what it is like, away from the headlines, to become an American today.

The Marshall Project is a nonpartisan, nonprofit news organization that seeks to create and sustain a sense of national urgency about the U.S. criminal justice system. We achieve this through award-winning journalism, partnerships with other news outlets and public forums. In all of our work, we strive to educate and enlarge the audience of people who care about the state of criminal justice.   www.themarshallproject.org

Every month, at 7 pm on the first Tuesday, the Unitarian Universalist Church of Oak Cliff screens a film focusing on an important social justice issue. We hope you'll leave inspired and ready to hit the road in your own quest for a better world.