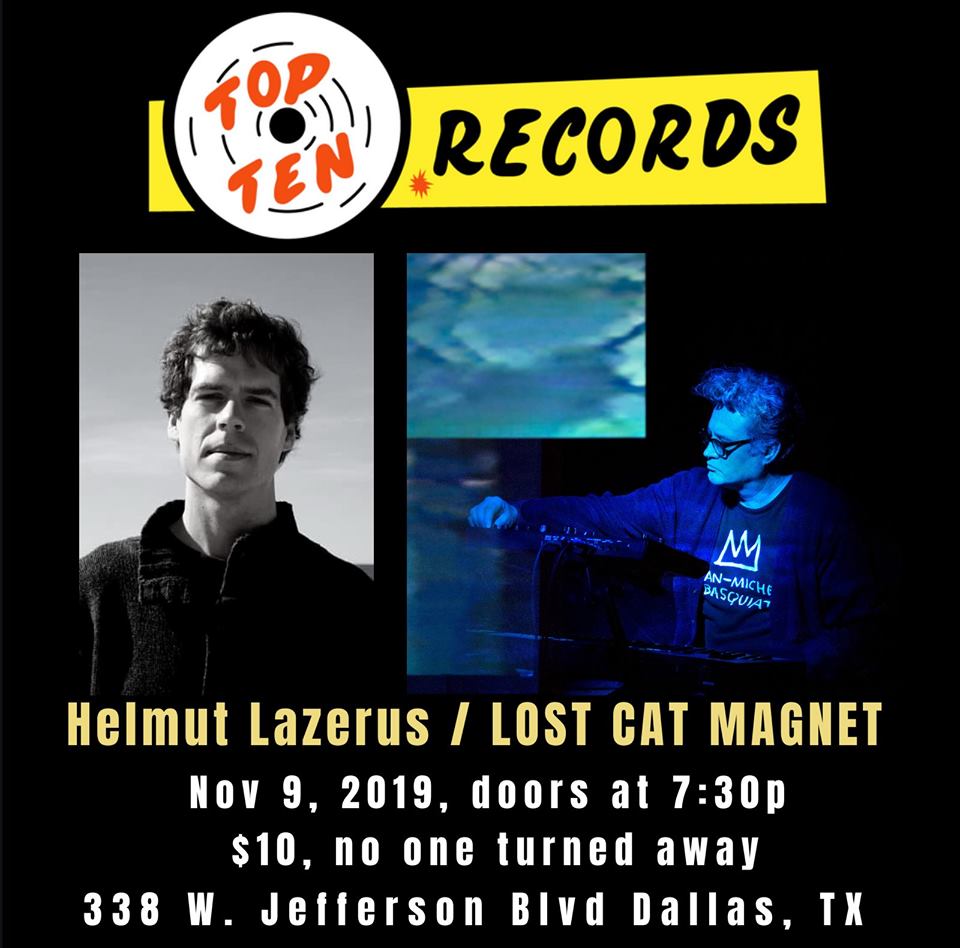 Shop opens at noon
Event starts at 7:30p
Music starts at 8p
$10, no one turned away for lack of funds
BYOB

While also known in Austin Texas as a visual artist and writer Ricardo returned to music in 2012/13, working with Willie Oteri and Dave Lazcko’s WD41+ and has been a longtime regular in Harold McMillan’s improv music scene at Kenny Dorham’s Backyard. Simultaneously he worked with Ramon Mills of Heterodox Records and Production Unit Xero on numerous adventurous recording projects.

In 2014 Ricardo’s main musical endeavor was been PetCatMan, an early 70’s Euro-prog influenced quartet. With Ricardo on synth, keys and devices, Christopher Petkus on Guitar, effects and devices, Steve Mankenberg on Drums, and Jakob Marsala on Bass.

Lost Cat Magnet/LCM as a solo act raised its furry head on occasion throughout all this. First performing in Austin at the Green House venue on North Loop in 2012, then the original Cheer Up Charlie’s on East 6th, Elysium on Red River, and numerous art venues around Austin.

In 2017 Lost Cat Magnet released “The Snake Necklace & The White of the Eye” on Heterodox Records. Recorded with Ramon Mills and numerous Austin avant music luminaries. It showcased the width & depth of LCM’s musical world.

2018 saw the start of “O’Clock”, a project with progressive jazz artist Willie Oteri. An EP featuring the international single “The Nip” was released and is getting rave revues throughout Europe. Which prompted O’Clock’s 1st tour of Italy. A full album for O’Clock is planned for release in fall of 2019.

In July of 2019 Lost Cat Magnet/LCM released his 2nd album on Heterodox Records “Xircus”. Written primarily in the twelve days spent in Genoa on the O’Clock tour. LCM further pushed the blurring of lines of composition, poetry and cinematic intent. The result is a deep, rich yet raw urban ambient collection that has so far garnered great reviews.